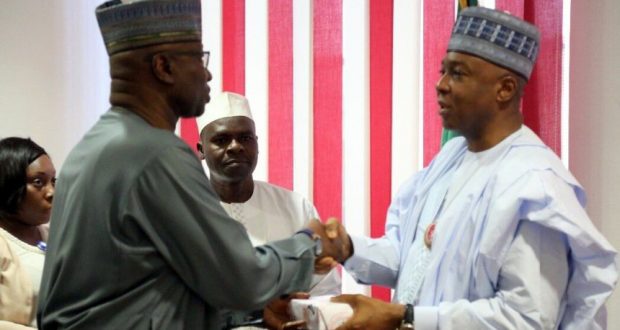 We are not in competition with National Assembly – Presidency

The new Secretary to the Government of the Federation (SGF), Boss Mustapha, on Monday, said the Presidency was not in competition with National Assembly (NASS) in any way.

He made this known when he paid a courtesy visit to the President of the Senate, Bukola Saraki in Abuja.

He said the Presidency would not be able to succeed in implementing policies for the good of Nigerians without the cooperation of the National Assembly.

“I am here today to extend hand of friendship and to solicit for the cooperation of
the National Assembly because our constitution is very explicit when it comes to the principle of Separation of Powers.

“If the National Assembly does not cooperate with Presidency, I am not very sure we will be able to achieve the desired result that we want to see, given the mandate that we have freely received from the people of Nigeria.

“So, this is basically to come and assure you that in every area that you are soliciting for cooperation of the Presidency, being the SGF, I will ensure that the National Assembly receives that cooperation.

“Whatever was lost in the past, we could quickly redeem and recover and make progress.”

Mustapha said the only way to effectively implement President Muhammadu Buhari’s change agenda was through cooperation.

He added that “this is because none of the three-pronged approach of the president — security, diversification and fight against corruption can be achieved if we do not receive the support of the National Assembly.”

He explained that to diversify the economy, Bills must come from the National Assembly and be debated upon and eventually return to the President for assent.

“We can’t fight corruption if we do not have an institutional framework which is strengthened in every ramification to ensure that corruption is dealt with.

“It is a big menace that has constituted a source of embarrassment and we can’t fight insurgency unless we put machinery on ground that requires the support of the National Assembly.”

He added that the role of the National Assembly was distinct, specifically to promote good governance, provide oversight and ensure that funds were used judiciously for the purposes they were meant for.

He commended Saraki for his style of leadership, which he said contributed immensely to good governance.

The Senate President congratulated the SGF on his appointment, saying the visit marked a new phase of cooperation between the Executive and the Legislature and omen for democracy.

“I got the notice rather short but it was important that we meet. Your visit truly shows your intention to ensure we truly work together to make Nigeria great.

“You are very right. In the Presidential system that we run, it is not possible to achieve all our goals if the Executive and Legislature do not have – not just an okay relationship but fantastic and very close relationship.

“What you have done this afternoon has really brought that closer and I am sure that all my colleagues are going to appreciate that on the floor tomorrow when I communicate this to them.

“You have started on a very good note and I thank you for all your kind words when you talked about some of the work we have done in the past in bringing the government together and we will continue to work to ensure that we deliver on our promises.

“As you said, the Constitution is very clear on what our responsibilities are. You did not write it and I did not write it, neither did any of us in the National Assembly today, but we all swore to it and we must continue to ensure that we work with it for the interest of Nigeria.”

Saraki assured that the National Assembly would work to see how best to resolve issues brought before it by the SGF.