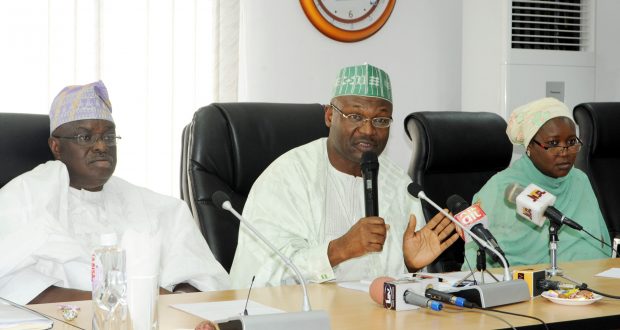 With a little over e week to the election date of November 18 to decide who would steer the affairs of state in Anambra, the Independent National Electoral Commission (INEC) on Wednesday restated its readiness to conduct a credible and fair election.

The Head, Elections and Party Monitoring, Ibe Ibe, said this in Awka during the public presentation of research findings on the situation analysis of security and public safety in the state.

The research findings was carried out and presented by an NGO, the Centre for Law Enforcement and Education (CLEEN) Foundation supported by Open Society Initiative for West Africa (OSIWA).

Ibe said the non-sensitive election materials, had already been sent to the commission’s offices in the 21 local government areas, while sensitive materials would be distributed on the eve of the election.

He urged voters to ensure that they collect their Permanent Voter Cards (PVCs) and come out en mass to vote for candidates of their choice.

The INEC official said serving corps members would constitute 90 per cent of the ad hoc workers who would be engaged for the election, adding that the remaining 10 per cent would be officials of some Federal Agencies.

“The Commission is fully prepared to ensure a free, fair and credible election,” he said and urged stakeholders to abide by the provisions of the 2010 Electoral Act (as amended).

On his part, the State Police Commissioner, Garba Umar, also promised adequate security for voters and other stakeholders during and after the election.

Umar, who was represented by Maiyaki Baba, said the threat by Indigenous People of Biafra (IPoB) to scuttle the poll should be discountenanced, adding that the police is fully in charge of the security situation.

He also allayed the fears of residents about the possibility of political violence before and during the forthcoming polls.

The Lead Researcher for CLEEN Foundation, Kelechi Iwuamadi, who presented the report, said the research was carried out by the group between October 16 and 27.

According to him, the potential threat by IPOB of “no-election’’ campaign could pose a threat to the smooth conduct of the governorship election.

Iwuamadi also identified “hostile relationship” between the security operatives, particularly the Military and members of IPoB as a possible threat.

The lead researcher said there was a need for security operatives to fully realise that they were coming into the state for elections and not for Python Dance Operation II.

Previous: Obiano declares November 17 work-free to enhance massive election turnout
Next: PDP raises the alarm on plot by EFCC to arrest its members on fake charges