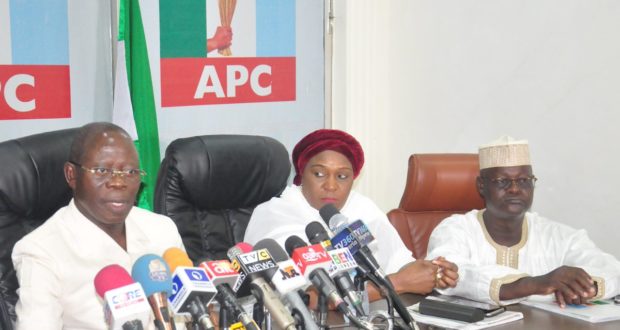 We did not pay a dime for Omisore’s support in Osun, Alhassan, Shittu not fit and proper to be APC flag-bearers, says Oshiomhole

Adams Oshiomhole, the National Chairman of All Progressives Congress, APC, has debunked insinuations that a deal involving money and political concessions were made with Iyiola Omisore of the Social Democratic Party, SDP, to support the party.

Oshiomhole, while addressing journalists on Friday in Abuja, said the people of Osun made their free choice by voting the APC candidate, Gboyega Oyetola, at the election.

He, however, added that the APC had some agreements with Omisore which bothered on policies and the welfare of the people of the state, but certainly did not give him money as was being speculated.

The APC National Chairman also gave reasons the Minister of Women Affairs, Aisha Alhassan, was not cleared to contest the party’s ticket in its Governorship Primary slated for Sunday.

The Minister was in the race to contest Taraba governorship in 2019.

Oshiomhole said the party could not tolerate those who played anti-party activities within its ranks, adding that the Minister judging from her actions, had not been completely loyal to the party.

He said after reviewing utterances from the Minister and following her obvious relationship with one of the PDP Presidential Aspirants, the APC National Working Committee (NWC) had no option than to disqualify her.

“She had issues that have to do with party loyalty. Our Constitution is clear and it dictates that to contest elections or even hold office in the APC, you must be loyal to the party in every material concern.

“From all she had said in the past and even her comments and general attitude during the screening, the NWC reviewed everything taken together and we arrived at the conclusion that she does not possess the level of loyalty the APC requires for her to contest elections on our platform.”

He added that the Minister knew she was being denied from using the APC platform to contest the Taraba governorship election in 2019.

Oshiomhole also reacted to the Minister of Communication,  Adeboyo Shittu, who was also not cleared to contest the Governorship Primary, saying the party could not compromise.

The Minister was not cleared because he did not participate in the compulsory one year National Youth Service Corps (NYSC) scheme.

“He admitted that he did not do the mandatory NYSC as provided for under the law, and in his own judgment, his being a member of the Oyo House of Assembly and now as a Minister of the Federal Republic were enough sacrifices.

“But for us as a party, we know that NYSC is a mandatory scheme. It is not something you may elect to do or abstain from doing

“So, for us, not participating in the NYSC raises very serious moral issue as well as legal issue.

“If he did not do NYSC, that for us was enough to disqualify him and we had to find the courage to do so,” Oshiomhole said.

He added that the recent defection of some APC members to opposition political parties had made the party to be more critical in terms of who was given its platform to contest elective offices.

Oshiomhole stressed that the core values that binded the party were non-negotiable, adding that the Electoral Act and the APC Constitution forbids anyone from being a member of more than one political party at a time.

Oshiomhole appealed to the President of the Senate, Bukola Saraki and the Speaker of the House of Representatives, Yakubu Dogara, to reconvene the National Assembly.

This, he said, was critical to consider the pending Bill from the Independent National Electoral Commission (INEC) for the conduct of the 2019 general elections and other matters.

He stressed that the President of the Senate was under a huge moral burden to resign or be impeached.

Oshiomhole, while commenting on the party’s ongoing Presidential Primaries across the Federation, said it was waiting for the results being collated from various Wards before making it public.

Previous: Lagos APC distributes ID cards to members ahead of Primaries
Next: Hamzat drops out of Lagos governorship race, steps down for Sanwo-Olu