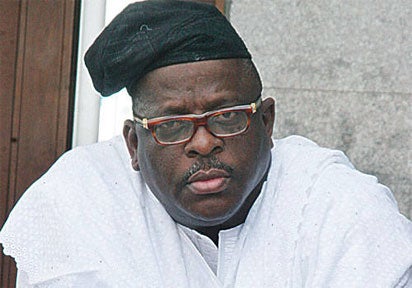 We removed ex-PDP Chairman because he betrayed us- Buruji Kashamu

Frontline politician and ex-Senator, Buruji Kashamu has disclosed the reason why the former chairman of PDP in Ogun State Chief Adebayo Dayo, was removed.

According to him, Dayo was trying to sell the party’s structure to Sir Kessington Adebutu.

In a statement in Lagos on Wednesday, Kashamu said Dayo met with Sir Kessington Adebutu at a hotel where he attempted to sell the structure of the party to the businessman.

According to him: “We have the evidence of the meeting at Equity Hotel, Ijebu Ode, where Dayo collected money to sell the Ogun State structures of the PDP to Sir Kessington Adebutu.

“What the purported buyers should realize is that they have been scammed, as Dayo has no power to transfer the structures of the party to anyone.

“How can anyone think that he can sell a political structure comprising many interests and major stakeholders for a mere N100 million?”

Dayo however denied the allegation, saying it was Kashamu’s group that tried to bribe him with N10million to write the Independent National Electoral Commission (INEC) that the party’s delegate congress had been conducted.

But Kashamu denied offering the embattled former chairman any bribe, saying there was no reason for that since he had been financing the party in the state over the past 10 years.

Kashamu said: “No one is against the reconciliation of any aggrieved members but the question members of the party continue to ask is: How could Dayo claim that he was trying to reconcile anyone when he did not have any meeting with any stakeholder or any of the party executive committees at LGA or ward level and carried nobody in the State Executive Committee along before signing his contract with the purported buyers?

“What is more intriguing is: how would someone who calls himself PDP chairman want to sell the party to people who still have a binding and subsisting three-year agreement with the Allied People’s Movement (APM) in Ogun State?

“The agreement was publicly announced on the 7th of March, 2019. They have just done a year and the agreement will lapse in 2022. These elements have neither repudiated the agreement nor have they formally returned to the PDP.”

“This provision empowers the Ogun State Working Committee (OGSWC) of the PDP to suspend any member of the party for a period not exceeding one month during which period such a member may be referred to the appropriate Disciplinary Committee.

“Once it was resolved to lodge a complaint at the NEC against Dayo for the question of his discipline to be entertained by the NEC of the party, the members of the OGSWC further resolved that he should be suspended in the interim until the NEC decides whether or not to initiate the necessary disciplinary process against him.”

He added: “Contrary to Chief Adebayo Dayo’s argument, there is no encumbrance whatsoever on the capacity of the OGSWC to pass a motion to suspend him from his position as state chairman.

“This was not a meeting of the Ogun State Executive Committee of the PDP to determine whether to refer Dayo to a state disciplinary committee of the party as forbidden by Article 59(3) of the PDP Constitution.

“It was a duly convened extraordinary meeting of the OGSWC of the PDP to discuss the party’s activities and it was at that meeting that the decision was taken that the OGSWC be a complainant to the NEC of the party, against Dayo, which may then refer the matter to the appropriate disciplinary committee at the national level

Previous: Akeredolu vs Unity Forum: Why APC’s internal crisis in Ondo could spell doom for party
Next: Fuel Subsidy: PDP govt most corrupt, should bury itself in shame- Buhari’s group