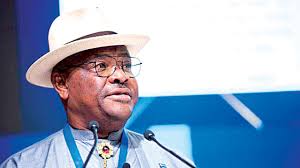 We Trust Wike, he can’t leave our party- PDP reacts to meeting with APC Govermors

The main opposition, the Peoples Democratic Party has reacted to the meeting that Govermor Nyesom Wike of Rivers had with some Governors of the All Progressive Congress APC.

It will be recalled that three Governors elected on the platform of APC  were at Port Harcourt on Friday to have a meeting with governor Wike.

The three Governors were Kayode Fayemi of Ekiti State, Rotimi Akeredolu of Ondo State, and Babajide Sanwo-Olu of Lagos State.

Although, the major agenda of the meeting has not been officially revealed, but there ate speculations that they wanted to woo the Rivers Governor to the ruling party, APC.

Reacting to the lobby, PDP said that the APC Govermors would not succeed in their mission, noting that Wike would not dump PDP for any party.

Speaking on the development, the  PDP National Publicity Secretary, Hon. Debo Ologunagba, said that he is optimistic that Wike would not for any reason leave the party.

“He’s a man you can vouch for to speak wisely when it comes to matters of politics. He understands the issues.

“And so, we are confident because he’s been a true party man. Governor Wike has not left the PDP one minute since his membership of the PDP. That tells you the character of this individual; his dexterity, his steadfastness, his support and his passion for the party. That has never been in doubt.

“And so, when you read speculation from the press, which of course is welcome, but that may not reflect the true position.

“So, we know that Wike is a man that is consistent, that believes in saying what he believes in, that says it the way it is and a man who is very very passionate about the PDP.

“We believe that he is a man who is a major stakeholder in the party, which I have always described as a phenomenon.

According to him, Wike has been known to be a strong loyalist of the party who they know and trust very well.

“I mean, you recall that this individual, this governor, this outstanding governor that we call Mr. Project was at one point in this party circle the only man standing. So, we know him.

“He knows better than many of us when it comes to politics and we are confident in his membership of our party and in the critical role he has to play in fulfilling the mission and the mandate of our party, which is to rescue, rebuild and re-direct our country. We have no doubt about that.”

Previous: Ex-Oyo gov, Olunloyo not dead, in a critical condition- Family
Next: Senatorial Ticket: Why we rejected Akpabio and Lawan’s names – INEC