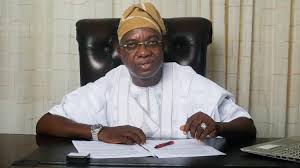 The Peoples Democratic Party in Oyo State  has threatened to remove the deputy governor of the state, Engineer Rauf Aderemi Olaniyan, if he fails to resign immediately.

It will be recalled that the Deputy Governor on Sunday announced that he had dumped  PDP for APC.

However, PDP has advised the deputy governor to resign immediately to avoid impeachment.

The, in a statement released by its Publicity Secretary, Engineer Akeem Olatunji, threatened to remove the deputy governor if he fails to resign.

The Oyo State ruling party said that it was determined and resolved to retrieve the party’s mandate being withheld illegally and unlawfully by Olaniyan.

Olatunji said, “It is only when you contest election as an independent candidate and win and then decide to move to any political party of your choice that you become the owner of the votes cast by the electorates, unfortunately for Olaniyan who wants to eat his cake and still have it.

“Our position is simple and very clear on this matter and as a matter of legal implication, the votes in any election in Nigeria are to political parties, and not candidates.

“Failure to follow this advise and adhere strictly to it from the PDP which is the legitimate owner of every single vote cast by the electorates in the 2019 governorship election, the PDP shall not hesitate to immediately deploy every constitutional means to prevent this daylight robbery.

“We’re determined and resolved to retrieve the party’s mandate being withheld illegally and unlawfully by the deputy Governor, Engr Rauf Olaniyan because it belongs to the people of Oyo state who have handled same to the PDP”.