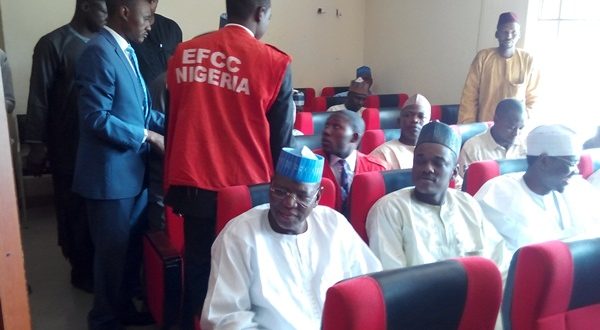 The Presidency says it has uncovered plan by politicians seeking the destruction of national institutions such as the courts, the Economic and Financial Crimes Commission (EFCC) and “everything good that the nation stands for”.

Garba Shehu, the Senior Special Assistant to the President on Media and Publicity, made this known in a statement issued in Abuja on Sunday.

The Presidential Aide cited the recent series of interviews by a  former governor of Jigawa and Presidential aspirant under the Peoples Democratic Party (PDP), Sule Lamido, attacking President Buhari’s efforts on ongoing war against corruption, as part of the grand plan.

He, however, described the attacks by Lamido “as “a reflection of the intellectual and moral bankruptcy of the opposition in the country.

“It is only in Nigeria that a leader will divert money belonging to the public into his children’s account then turns round to start pontificating on public morals, in the process subjecting the nation’s honest leadership to daily attacks based on falsehood.

“It is even worse that such a person, facing criminal prosecution will start going round saying he wants to be President. Is this not one of the reasons why other countries are laughing at Nigeria?

“This is hooliganism. It is not opposition politics,’’ Shehu noted.

The Presidential Spokesman challenged Lamido to convince Nigerians that his trenchant attacks against the government and the Judiciary were not a smokescreen to becloud the atmosphere of his criminal prosecution.

“In his diatribe published in the Vanguard newspaper last week, it is clear that the former governor not only set out to mock the President but the Judiciary and important national institutions.’’

According to him, this is part of an orchestrated plot to divert public attention from his scam related cases.

He added that, “If President Buhari’s war against corruption as he said, was a mockery what does one say of Lamido’s sworn efforts to sabotage the country’s efforts to rid itself of the cancer of corruption?

“If accountability of public officials is the very essence of a mature democracy, it is indeed ironic that a politician, seeking the leadership of the country, making a mockery of institutions and leaders seeking to entrench that.

“As a country, Nigeria settled for President Buhari not just as President but the watchman of people’s wealth.”

Shehu observed that the citizens are happy with Buhari’s efforts in fighting corruption and the whole world was applauding him, while the African Union, the AU named him as the Champion of the war against corruption.

He stated that opposition politicians like Lamido needed to come to terms with the fact that their act needed updating.

Previous: Lose or win: PDP Chairmanship aspirants agree to work together
Next: Governorship election: Police warn IPoB and its members to steer clear of Anambra