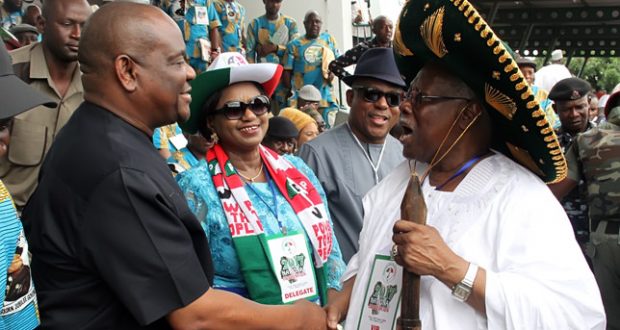 PDP Chairmanship: What George did was an exhibition of failure, says Wike

Rivers Governor, Nyesom Wike, says he has right just like every individual to support any aspirant of his choice to contest the Peoples Democratic Party (PDP) National Chairmanship position.

He said this on Saturday in Abuja, at the party`s National Convention.

Wike was reacting to allegation that he was imposing a particular aspirant on party members.

“You know in politics you hear a lot of stories, I have a right to support any candidate of my choice, and I do not see how that can be said to be imposition.

“Making statements that some people have hijacked the party is not correct, with all due respect, we are not playing sentiments, the people know what they want,’’ Wike said.

He added that though governors may have influence, such influence was limited to their states, saying that there was nothing wrong in a governor backing an aspirant he believed in his capacities.

One of the aspirants, Olabode George, a member of the PDP Board of Trustee (BoT), while announcing his withdrawal from the race, accused Wike of insulting the Yoruba race on a national television.

“Wike said the Yoruba people had never contributed anything meaningful to the success of the PDP,” he said.

George maintained that Wike must tender an unreserved apology to the Yoruba people for his utterances against the race.

George, who was among four other aspirants that withdrew from the race, also accused Wike of hijacking the party`s machinery and trying to impose a particular aspirant on its members.

The PDP BoT member who stood for the party`s micro-zoning principle, said that the South-West was already cheated with the entrant of aspirants from the South-South.

He also alleged that the PDP Chairmanship position had been sold to the highest bidder.

“It appears the PDP is bent on self-destruction, I can’t be part of this, the Chairmanship position has been sold to the highest bidder.

“It appears that PDP has lost its soul. I cannot be part of this criminal allegation, the PDP is now mangled.

“I hereby withdraw from the fraud as a Yoruba patriot, I will stand for our people,’’ George said while announcing his withdrawal from the race.’’

He added that he entered the race due to the micro zoning arrangement which he said had been trashed.

He, however, explained that he did not step down from the race for anybody, but for the process and on principle, adding that his measure of experience was too heavy.

Wike, while reacting to the development, said; “with all due respect, George is suppose to be seen as a father, what he did yesterday was to exhibit failure’’.

According to Wike, George cannot change the fortune of the party in his zone when the opportunity presented itself.

He, however, expressed optimism that the PDP would become stronger after the convention in spite of the withdrawal of George and other aspirants from the race.

He added that George was one of the leaders of the party, and one of its founding father and could not run away from it.

“He has to remain in the party to join in rebuilding it,’’ Wike said.

Previous: PDP National Convention: How internet connectivity disconnected many
Next: PDP would always work for the betterment of the common man – Akpabio