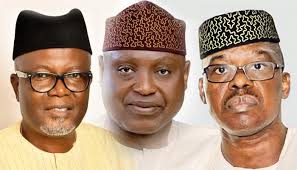 What to know about Ekiti governorship election holding today

The Ekiti governorship election which is holding today will the first test of will between the presidential candidates of the two dominant parties in the country, the All Progressives Congress (APC) and the Peoples Democratic Party (PDP), Bola Tinubu and Atiku Abubakar, respectively.

Apart from being a three-horse race among the APC, PDP and the Social Democratic Party (SDP), today’s election is also a proxy war between the immediate past governor of the state, Ayodele Fayose and incumbent Governor Kayode Fayemi. For Fayose, a victory for his political protege, Bisi Kolawole, who defeated former governor Segun Oni and former deputy governor, Kolapo Olushola, will boost his profile in the SouthWest, Tribune newspaper reports.

Since his candidate for the PDP zonal chairman, Eddy Olafeso, lost the leadership of the South-West PDP to Oyo State governor, Seyi Makinde’s choice, Taofeek Arapaja, his profile has waned significantly.

A victory for Kolawole will certainly boost Fayose’s standing at the party’s national secretariat.

For Governor Fayemi, a former presidential aspirant, retaining the APC grip on the state is the battle of his life. Fayemi, the leader of the party in Ekiti State, is presiding over a heavily fractured state chapter of the APC despite the pretence of a united political family.

The victory of his anointed aspirant, former Secretary to State Government, Biodun Oyebanji, over the likes of the senator representing Ekiti Central, Opeyemi Bamidele; former Minister of State for Works, Dayo Adeyeye and Ojo Kayode, had polarised the party.

A victory for the APC candidate in the face of a divided house is one that the chairman of the Nigeria Governors Forum is determined to achieve to remain relevant after leaving office.

Besides the two political godfathers in the state, today’s election is a battle for the control of the South-West between Tinubu and Atiku.

The PDP controls only one of the six states in the region, Oyo.

For Tinubu, his effort to reconcile aggrieved chieftains ahead of the election shows that he is leaving nothing to chance to retain the state despite the APC controlling five states in the region.

The APC presidential candidate was in the state to campaign for Oyebanji ahead today’s election.

While Senator Opeyemi Bamidele is believed to have been adequately pacified with the ticket to return to the Senate, Tinubu has appealed to Dayo Adeyeye, another aggrieved aspirant who incidentally is the national chairman of the South West Agenda for Tinubu (SWAGA), to team up with Oyebanji and Fayemi to secure victory for the APC.

Adeyeye had earlier lost his seat as the senator representing Ekiti South to Biodun Olujinmi and his supporters have continued to accuse Fayemi of orchestrating Adeyeye’s ouster as the governor was alleged to have given discrete support to the PDP candidate and current senator.

Tinubu, at the Tuesday rally, said the APC was determined to retain Ekiti, President Muhammadu Buhari having entrusted the South-West with the party’s presidential ticket.

He said: “President Buhari is a man of integrity. Honour is better than riches. He had said we (APC) were going back to the South for the next president of Nigeria and he has kept that promise for us. It is now left for us to work for the progress and unity of Nigeria.

“There is no house where we don’t have quarrels. Democracy is full of twists and turns, hills and valleys. We will have quarrels but we will not burn down the house. I am a builder, a successful builder for that matter.

“Those of us that said we are fighting, you are lying. We have settled our quarrel. This is the first step in the elections ahead. The president has said I should be involved in this (Ekiti) election and we are going to succeed.

“I have not failed in any elections before. Four years ago, myself, [Governor] Bagudu and others were here and you listened to us and we succeeded in that election.”

In spite of his cold relationship with Fayose, the PDP presidential candidate, Atiku Abubakar, is showing more than a passing interest in today’s governorship election as a victory for the PDP candidate would swell his area of influence ahead of next general elections.

It could not be confirmed whether Atiku has reached out to Fayose, but party sources told Saturday Tribune that the former vice president is working with certain leaders of the party in the South-West to give support to Kolawole.

Chief Segun Oni of the SDP is one candidate that may spring a surprise at the election.

Apart from his popularity across the state, it is believed that aggrieved members of the PDP and the APC are working for his success at the poll.

Indeed, an analyst told the Saturday Tribune on Friday that “this race may turn out a straight fight between the APC and Segun Oni’s SDP”.

The chairman of the Independent National Electoral Commission (INEC), Professor Mahmood Yakubu, at a stakeholders meeting in Ado-Ekiti, midweek, said the commission would remain an unbiased umpire in the country’s electoral system.

“Let me assure political parties and voters that the task of electing a new governor will be left in the hands of Ekiti voters. We won’t take any action to the advantage or disadvantage of any particular party or candidate. We are going to do everything according to the constitution and provisions of the Electoral Act,” Yakubu said.

Nigerians, however, continue to take his assurance on adequate logistics with a pinch of salt. Malfunctioning of card readers was a regular occurrence at polling booths until the commission introduced the Bimodal Voters Accreditation System (BIVAS), a technology with dual capacity for fingerprint and facial authentication of voters, to guard against voting by identity theft where one person uses another person’s Permanent Voter’s Card (PVC) to vote using the incident form. With this development, the use of the incident form was abolished – no voter who has not been successfully accredited electronically using the BVAS will vote.

That initiative has been dogged with its own shortcomings.

According to INEC, since BIVAS is equipped with a camera, it has the capacity to snap polling unit level result and upload same to the INEC Result Viewing (IReV) portal so that citizens can view results as election is concluded in each polling unit. It recorded limited success in November 2021 governorship election in Anambra State.

Before Osun State, Ekiti State provides an opportunity to assess INEC’s preparedness for electronic voting after both chambers of the National Assembly, in November 2021, bowed to public pressure and surrendered to electronic transmission of results during its passage of the Electoral Act Amendment Bill. 988,923 registered voters, 76% PVCs collected.

According to INEC, the 16 political parties that will participate in today’s election will be battling for majority of votes from the 76 per cent of the 988,923 registered voters who have collected their Permanent Voter’s Cards (PVCs).

The commission disclosed that voting would begin by 8.30 a.m. and end by 2.00 p.m., provided the last person on queue has exercised their civic responsibility.

Deputy Inspector General of Police, Johnson Kokumo, announced a restriction of movement from 12.00 a.m. till 6.00 p.m. today as part of measures to ensure a successful conduct of the governorship election.

Kokumo, who is the supervising officer for the over 17,000 police operatives deployed in the state, added that no fewer than six security officers would be stationed in each of the 2,445 polling units to ensure the maximum security of voters, INEC ad hoc staff and other stakeholders.

He said: “From our record, we have 2,445 polling units in Ekiti and I can tell you that with support from other sister agencies, the least number of security operatives you will see at each polling booths on Saturday is six.

“They will ensure the safety of the materials, INEC officials, voters and everyone in the voting area. I want to assure the people of Ekiti that security will be watertight. There will be security across nooks and crannies to instill confidence in the people that will exercise their civic responsibilities.

“We have taken adequate measures to stop vote-buying. Both the buyers and the sellers will be arrested if caught because they will be regarded as criminals and the act is against the law of the land.

“To this end, operatives of the Nigeria Police Force and the military as well as other security agencies have been deployed across the state borders to enforce the restriction order and ensure that criminally minded individuals do not infiltrate the state to cause mayhem during, before and after the election.

“The IGP hereby assures the public of the Force’s readiness to perform its statutory duty of the protection of lives and properties of law abiding citizens of Ekiti State throughout the period of the election and beyond while calling on everyone to support and cooperate with the operatives deployed and ensure prompt report of any suspicious person or group of persons to the nearest police station.”

The Acting Deputy Commandant General Operations of the Nigeria Security and Civil Defence Corps (NSCDC), Lawal Haruna, said out of the 9,747 personnel, 160 armed, all-female squad would also be deployed to resist any form of violence, intimidation and abuse against women involved in the political process.

While disclosing that some flashpoints had already been identified, he said information regarding violence-prone areas had been shared with other security agencies involved in the election.

Haruna added that two personnel of the corps would be in each polling unit across the state. He warned the personnel to be apolitical and discharge their duties with high level of professionalism and told those carrying arms among them not to go near polling units except they were called for emergencies.

The Center for Democracy and Development (CDD) lamented the trend of fake news in the build-up to the election and called for the arrest and prosecution of those found culpable.

The CDD director, Idayat Hassan, represented by the Senior Programme Officer, Austin Aigbe, announced on Friday that the organisation had deployed 205 trained election observers to protect the integrity of the election across the 16 local government areas.

The CDD boss added that the deployed observers had been mandated to report any threat to the credibility of the poll for onward transmission to INEC and police for action and prevention of such occurrences in future elections.

Hassan warned against the preponderance of fake news in election, describing it as the most visible and mind-boggling evil threatening today’s election.

“Some of this news is meant to mislead the voters, affect turnout and incite electoral violence,” he said.

On his part, the team lead of Kimpact Development Initiative (KDI), Bukola Idowu, called on the security agencies to look out for those who will be involving in financial inducement during the election.

He said the findings of the organisation also indicated that there would be violence in some parts of the state during the election, urging the security agencies to be professional.

According to him, vote buying is not acceptable and against the law of the land, “we want security agencies to be firm and arrest both buyers and sellers of votes.