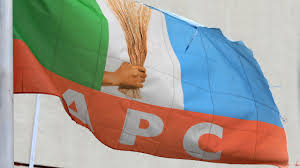 Why APC will face a serious challenge in 2023- Stalwart

A top stalwart of the ruling party, the All Progressives Congress (APC), Victor Lar has predicted that the party will face a serious challenge in 2023,

The political bigwig  represented Plateau South Senatorial District in the National Assembly between 2011 and 2015.

Speaking on the next general elections, he claimed that ex-Borno Governor, Ali Modu Sheriff, as the best national chairmanship aspirant.

He was speakingon the February 26 convention in an interview with newsmen on Sunday.

“The APC will face a peculiar challenge in 2023 because President Muhammadu Buhari, known to have galvanised over 12 million votes consistently, will not be on the ballot.

“This will create a serious challenge whereby the party will need to navigate very carefully so as to succeed,” he said.

According to him,  the next chairman must be able to mobilize and unite all interests to ensure victory at federal and state levels.

He listed the major blocs as the presidency, governors, national assembly and party leadership.