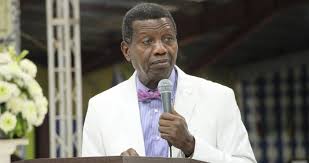 Why I will never support any political party or candidate- Adeboye

The General Overseer of the Redeemed Christian Church of God (RCCG), Pastor Enoch Adeboye has broken silence on endorsing a particular candidate ahead of 2023 general elections.

According to the respected cleric, he will not endorse any presidential candidate because they were all like his children.

He added that he  was not beholden to any political party, saying politics was not his calling.

The popular cleric made this remark during the special monthly prayer and thanksgiving service at RCCG National Headquarters, Throne of Grace, Ebute-Meta, Lagos.

Speaking on the criticisms that trailed  the church’s establishment of a directorate of politics and governance, he told the congregation that they should not distract him from his role as a pastor.

Adeboye said: “Let me make it loud and clear. I am a pastor and I would never be a politician. I have never been and will never be.

“I am a pastor. I am not even a prophet. I only hear from Him once in a while. My assignment is to pray for you and pray for nations, including Nigeria. It has nothing to do with partisan politics. Don’t distract my attention.”

According to him,  he said he had never campaigned for anyone or directed his members to vote for any candidate or join a particular political party.

“I have never told you this is the fellow you should vote for either in secret or the open.

“I have never said this is the party you should belong to. I will never say it. Why? Because every party is heavily represented in the church.

“If I vote for anyone, I will be unjust to every one of my children. I am the father of all and I like it that way,” he said.

He urged members to exercise their civic duties.

“All I am saying and I am saying it loud and clear: nobody is born a Christian. You are a Nigerian first. You have a duty to your country to register to vote and to make sure your vote will count.

“You have a duty to belong to any party of your choice at the grassroots. You can’t fold your arms and refuse to vote and begin to complain.

“You must register, you must vote. You must sit down there after you have voted and make sure they count the votes and you take note of who they said won.

“You must make sure that there is no more rigging in Nigeria. I don’t care who you vote for. Do your duty. And you must do it.

“My assignment is to pray. I will pray for this nation. I asked for 1000 volunteers. I got more than 26,000 and we prayed. God heard. And the answer will come,” he said

Previous: Insecurity may end the existence of Nigeria- Accord Party warns
Next: Bola Ige: Don’t allow drowning politicians to use you- Omisore warns Soyinka