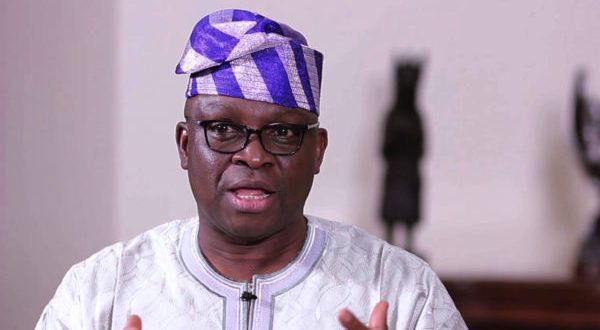 Former Governor of Ekiti State, Mr Ayodele Fayose has said that he would always acknowledge the National Leader of APC, Asiwaju Bola Tinubu as one of the builders of Yoruba nation and Nigeria generally despite the fact that they both belong to different political platforms.

According to Fayose, the former Governor of Lagos has paid his dues and he needs to be respected and honoured.

He vowed that he would not toe the feet of political detractors to shoot down the key APC chieftain.

Speaking to newsmen on Saturday, Fayose said nothing can make him dump PDP for another political party.

He said, “I am not championing the course of Tinubu, I am not in the position to do that, but there is no denying the fact that Tinubu is a prominent Yoruba leader, whether in APC or in PDP. There is no gainsaying that fact. Fayose is a prominent son of the Yoruba nation. Governors Nyesom Wike, Ifeanyi Okowa and Okezie Ikpeazu are prominent sons of southern Nigeria.

“What I am trying to say is that we can’t hide their identities and goodwill for political reasons. We can’t deny their contributions. Other leaders from the North like Ahmadu Bello made different impacts. So, Tinubu has paid his dues. I have paid my dues, Okowa has paid his dues, Wike has paid his dues. We need to acknowledge them.

Ex-Deputy Governor of Ondo State, Agboola Ajayi, also visited Fayose to felicitate with him on his 60th birthday. During the visit, Fayose urged Agboola to return to PDP.

He said: “It is important for you (Ajayi) to put the past behind, return to the PDP and join hands with other leaders in the State to rebuild the party”.