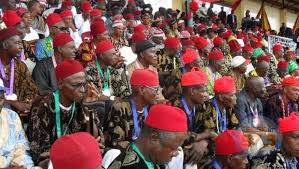 Why marginalization of Igbos is a well orchestrated plot- APC chieftain

A top stalwart of the All Progressives Congress (APC), Chekwas Okorie, has lamented that the marginalisation of people of the south east is a well orchestrated plot to make sure that the civil war continues by other means.

The top politician made this accusation  while speaking with journalists on Friday in Abuja,

According to him,  the plot was meant to exclude Ndigbo from the commanding heights of Nigeria’s economy, bureaucracy and politics.

Speaking further, he said that he is  of the view that the war against Ndigbo did not end in 1970.

Okorie stated: “There is an orchestrated, well-ploted design to exclude Ndigbo from the commanding heights of Nigeria’s economy, bureaucracy and politics.

“The marginalisation, exclusion of Igbo people is a well-orchestrated plot to make sure that the civil war continued by other means. But not being able to overcome it is as a result of lack of political leadership on the part of Igbo.”

He  blamed the lack of quality leadership of Ndigbo for some of the problems being experienced by people of South-East extraction in the post-civil war Nigeria.

“It was with proper leadership that the Igbo were relevant in the first place. When the leadership was no longer there it destabilised them and they have not been able to get back on track,” he added.