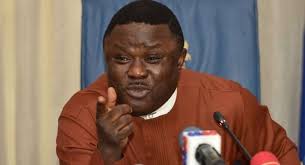 Why more youths should take part in politics- Ayade

The Governor of Cross River State, Ben Ayade has called for increased inclusion of younger Nigerians in national politics.

He made the remark on Saturday at the All Progressives Congress Youth Mega Rally at UJ Esuene Stadium, Calabar.

According to him, Nigeria has made much progress but it is not noticeable because young people have not been brought into governance.

Ayade noted that his belief in the youths is unshaken and he will create an expansionist programme to accommodate them.

He also promised to create a social welfare programme for the youths.

“I charge the youths in Cross River and indeed all of the country to always think big and stay on the part of morality.

“It is more important for more youths to be included in national affairs”, he said.

He called on youths in the state that no one can change their destiny.

He said, “Believe in yourself, nobody can change your destiny, only God.

“Don’t be intimidated by the circumstances of your birth.”

Speaking, the , state chairman of the APC, Alphonsus Ogar Eba, said youths in the state are ready to assume more leadership positions.

In his words, the chairman of the local organising committee for the event, Oden Ewa, said the summit was the first of its kind in the state.