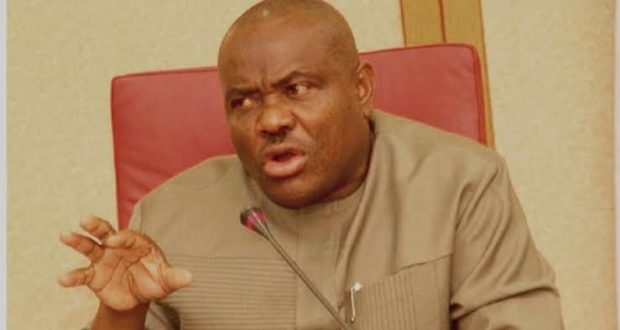 Wike to Dickson: You are a traitor, leave PDP now

Rivers State Governor, Nyesom Ezenwo Wike has rejected the offer of the Peoples Democratic Party (PDP) leadership to intervene in the rift between him and Bayelsa State Governor, Seriake Dickson over the Soku Oil Wells/fields which went back to Rivers State through court order.

Governor Wike, in a statement to newsmen by his Special Assistant on Electronic Media, Simeon Nwakaudu, said that there was no premise for the intervention by the PDP leadership, since the Federal High Court had already determined the issue in question.

He said: “I don’t know why they are interceding. They have no power to resolve the issue of Oil Wells. Secondly, the matter has been determined by a court of competent jurisdiction.

“Anybody who is not satisfied should go on Appeal. Are they interceding on behalf of someone who betrayed the party?

“They know that Governor Dickson betrayed and sold out the party. They know that during the 2019 election in Rivers State, what happened in the state. That Dickson worked with my opponent.

“Throughout that period, the National Chairman himself knows, that people were calling from all over the country to know the situation. Dickson never called one day.

“This was because of his alignment with the opposition . I can show proof that Dickson had already made up his mind to go over to APC.

Governor Wike said that the right thing for Dickson to do is to resign from the PDP, so that PDP leaders in Bayelsa State can rebuild the party.

“In fact, Governor Dickson ought to have resigned from the party by now. So that the leaders of PDP in Bayelsa would rebuild the party.

“The National Leadership of the party should know that the only option left for PDP to be strong in Bayelsa is for Dickson to leave the party,” he said.

According to Daily Post, the Governor said that the party’s intervention is no longer profitable in view of the incalculable damage done by the Outgoing Bayelsa State Governor.

He said: “Where was the party when Dickson sold out? Why couldn’t they come out to speak out? Governor Dickson, you have killed our party in that State. What is anyone wading in for? I am not going to be party to that and nobody will stop me .

“The party would have waded in when they saw fraud. That Dickson was killing the party in Bayelsa State. He has achieved his aim by making sure nobody comes after him as he leaves office in February, 2020.

“Do you know the effect of APC winning Bayelsa State? And they are talking of wading in.”