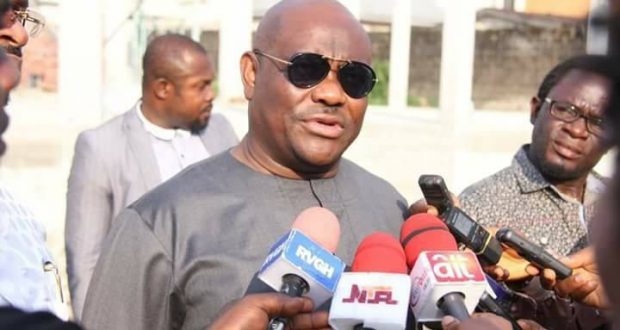 Wike to FG : You are aiming to use SARS to rig 2019 election

Rivers Governor, Nyesom Wike, has alleged that the Special Anti-robbery Squad (SARS) was being prepared by the authorities for the rigging of the 2019 general elections.

He stated that the so-called review of the operation of SARs following the outcry by Nigerians over the deadly illegal acts of the organisation was merely aimed at diverting public focus.

Speaking during a courtesy visit by the Board of Editors of Sun Publishing Limited to the Government House, in Port Harcourt, on Tuesday,  Wike described SARS as a gang of criminals, leading Nigeria to disaster.

The management of Sun Publishing Limited led by its Managing Director, Eric Osagie, visited to present the letter of nomination to the Rivers state governor as Sun Newspaper “Governor of the Year 2017.”

Wike pointed out that when Rivers State Government alerted the nation on the criminal activities of SARS across the state, the authorities disregarded the evidence presented.