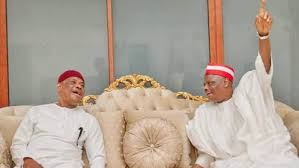 The meeting was  held on Friday at the Governor’s Port Harcourt country home,

It was learnt that the former Governor of Kano came with some delegations and held crucial discussions with Wike behind closed doors.

Politico.ng gathered that the crucial meeting had a former Ekiti Governor Ayo Fayose, in attendance.

They all left on Friday evening without revealing the reason for his visit.

Sources however said that Kwankwaso came to solicit for Wike’s support for his presidential ambition.in the meeting,

Kwankwaso came a few days after the presidential candidate of the Labour Party (LP) Peter Obi paid a similar private visit to Wike.

It will be recalled that on Thursday, a former Minister of Niger Delta Affairs, Elder Godsday Orubebe, and the PDP leadership in the Senate had separate private meetings with Wike.

The Rivers has been receiving PDP stalwarts and other top politicians as a result of controversies that led to his rejection as a running mate to, Atiku Abubaka.

Previous: I never envisaged in my wildest dream to become Tinubu’s running mate- Masari
Next: Peter Obi not an achiever, he is overrated, says Joe Igbokwe