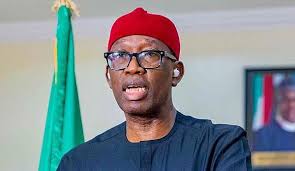 Will of God will decide my successor in 2023, says gov Okowa

Delta State Governor, Ifeanyi Okowa says he is committed to allowing God’s will to triumph in the choice of who will succeed him in 2023.

The Governor stated this at the 70th birthday anniversary and thanksgiving service of Chief Oritsetimeyin Adams at the Cathedral Church of St. Luke’s Anglican Church, Sapele, Sapele Local Government Area.

Okowa said that he wasn’t willing to lord himself on the people, but would rather allow the will of God to give the people a worthy successor as governor.

The 62-year-old commended the church and other leaders for their prayers and support and urged them to pray that God should give Delta a worthy person that would succeed him as a governor next year.

He said, “The choice of a successor is not by the wish of man but by the will of God.

“I thank the church and our leaders for their consistent prayers for our dear State because it is not about us but about what God wants.

“So, pray that whoever God wants will be the governor and may that person emerge as governor for the good of the people of Delta.

Previous: Osun Guber: Those planning to rig from Aso Rock should have a rethink- PDP
Next: 2023 Presidency: Crisis looms in PDP as ex-Governors reject consensus candidacy