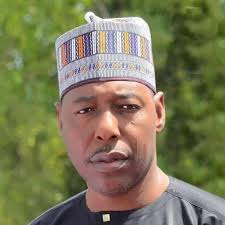 Some Borno youths under of All Progressive Congress (APC) Youths Vanguard have called on Governor Babagana Zulum to withdraw his statement describing the youths as miscreants and hanger-on.

They stated that unless the governor withdraws his statements, the days ahead will remind him of how they worked hard to bring him to power.

Speaking in an interview with journalists  on Tuesday, the spokesman of the group, Ibrahim Hassan, said, “We have worked hard to bring this government in power, only for the governor to say that it was youths vanguard (ECOMOG) and Mohammed Yusuf that created insecurity in the state. He is our father, we are appealing to him to retract that statement. We are not Miscreants or Boko Haram.

He added, “We are speaking on behalf of the remaining youths. We are APC that suffered a lot at the hands of insurgents, some of us were killed, maimed, suffered a lot of physical and psychological trauma, We see no reason why we should be joined with Boko Haram as the cause of insecurity or insurgency in the state”.

According to him, they were not happy with the attitude of the bad eggs among them, that was why they have been disciplining them

He added that they were not happy with the statement the governor made by joining them with Boko Haram but as law-abiding party members, they will continue to support the government and party at large unless otherwise.

Another member of the youth vanguard, Yakubu Dan Alhaji, said: “We have been working hard for the victory of the party right from the inception of democratic government in 1999. only for him to reward us with this statement, we are not happy but yet appealing to him to withdraw this statement except if he is saying that he brought himself to power.”