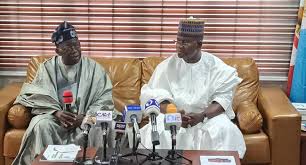 Yahaya Bello: I have learnt a lot of lessons from Tinubu

The Governor of Kogi State, Yahaya Bello of Kogi State on Friday told Bola Tinubu, the presidential candidate of the All Progressives Congress, APC, that he learnt a lot from what Tinubu taught him

He made this remark when Tinubu visited him in Abuja, barely 72 hours after the former Lagos State governor’s emergence as the flag presidential bearer of the APC for the 2023 election.

Speaking further, he said he had collapsed his Presidential Campaign Council and would donate the building to Tinubu’s campaign organisation.

Bello said, “Today, I have collapsed my Presidential Campaign Organisation. I’m donating my campaign organisation secretariat to you. I’ve learnt a lot from the little lecture you gave to us.

“What elders see when they’re in the valley, the younger ones won’t see it.”

Bello noted that the primary election had come and gone and promised to lead the youth to campaign for Tinubu to ensure that APC would win convincingly.

“Never again will the PDP lead this country. Thank you, all my colleague governors, for giving me the opportunity to learn from you.

“Senator Abdullahi Adamu (APC national chairman) has never lost an election and we will win the 2023 election. Our convention went well and peacefully,” Bello added.

Previous: Wike moves against Amaechi and Cole, orders Attorney-General to prosecute them
Next: APC Primaries: Why many northern delegates opted for Tinubu- El-Rufai