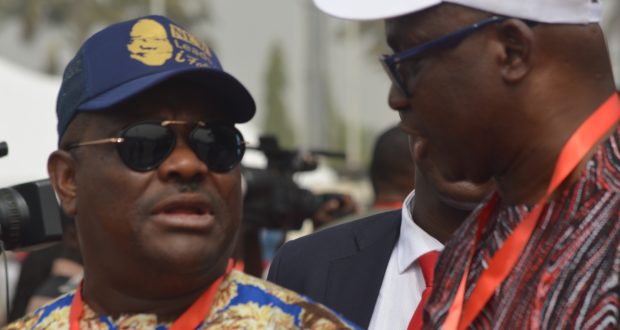 The Congress of Yoruba Sons and Daughters within the People’s Democratic Party say they were outraged by the insults allegedly hauled on the Yoruba by the Governor of Rivers State, Nyesom Wike.

They said they took a strong exception to Wike’s comment that the Yoruba were inconsequential and had no practical political importance in the PDP.

According to them, Wike also described former President Segun Obasanjo as a failure.

The group at a press conference addressed by its chairman, Dayo Ogunjebe, in Lagos, lamented that Wike’s comment was a reflection of how much the Yoruba in the PDP had been “pushed to the edge of the cliff” and relegated in the opposition party’s scheme of things.

The group in a statement titled, “The Yoruba people: Time for reflection,” read by Ogunjebe said the Yoruba in the PDP had been cheated by the party’s failure to elect a Yoruba man as the national chairman of the PDP.

He said, “Our leaders are being mocked. Our symbols of truth and sincerity are now being derided, snubbed, treated with contempt and disowned.

“The irreverent, scandalous, arrogant and most myopic statement of the Governor of Rivers State, Nyesom Wike, is the crowning of all insults upon our people

“Wike, in his most arrogant and selfish swagger, openly derided our people as being inconsequential and of no practical political importance in the PDP.

“This is rather scandalous and very benighted. He even insulted our former president, Olusegun Obasanjo, as a failure. This is an aberration.

“We, at the Congress of Yoruba Sons and Daughters within the PDP fold, are outraged, angry, disappointed, very sad and sickened about this very primitive utterance of Governor Wike.

“But we have been cheated. We have been maligned. The chairmanship position that rightly belongs Surely, we will never sit idle, while anyone attacks the collective interest of the Yoruba race.”

The group insisted that Wike must apologise for “his indecent statement.”