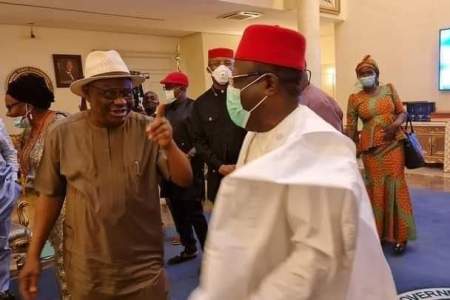 “You are a dictator ‘remote-controlling’ PDP,”- Umahi fires back at Wike

He vehemently denied the statement credited to Wike that he decamped to  the ruling All Progressives Congress (APC) because of his ambition to rule Nigeria in 2023.

Speaking on Arise TV interview programme on Wednesday, he said that Wike’s overbearing attitudes made other governors to turn their back against him.

He warned his Rivers State counterpart to stop casting asperson against him, saying that it will be dangerous if both of them continue media war.

“There is nothing that happens in PDP without his authorisation. He once said that PDP National Working Committee members are beggars and bribe takers. I have asked him that let’s not take on ourselves or else it will be very dangerous.

“So let’s us face the party, the party does not belong to him. And this is by no means personal and he is demonstrating the dictatorial tendencies in him by taking on me, a fellow governor. And that is very shameful.”

Mr Umahi said that many Governors would still dump PDP if their way of doing things don’t change for better.

warned that more governors would leave the PDP fold “unless there is a change in the mode of doing things in the PDP”.

Previous: Another PDP Governor planning to defect to APC- Wke
Next: US 2020: Confirmation of Biden’s victory expected as Georgia sets to release result of vote recount