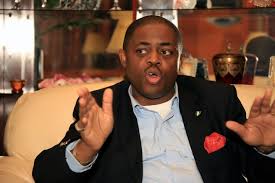 Fani-Kayode, has berated the Deputy Governor of Zamfara State for refusing to join Governor Bello Mohammed in the ruling All Progressives Congress, APC.

It will be recalled that  Aliyu Muhammad Gusau had refused to join Matawalle his boss, who recently decamped from the PDP to the APC.

The embattled Deputy Governor later decried prevalent plans to impeach him despite a court order stopping such moves.

According to him, the state assembly’s plan to proceed with the impeachment was indecorous and unlawful on Thursday.

Reacting, Fani-Kayode wondered why the Deputy Governor should betray the Governor, who picked him as Deputy in the first place.

“When a Governor decamps from one party to another shouldn’t his Deputy go with him? Is that not what loyalty is all about?

“Against his better judgement @Bellomatawalle1 picked you as his running mate & made you Deputy Governor & now you undermine & betray him? Shame on you!” Fani-Kayode tweeted

Previous: Stakeholders lament as Secondus’ ordeal throws PDP into a deeper mess
Next: Some of the problems in Imo were created by PDP – Gov Uzodinma