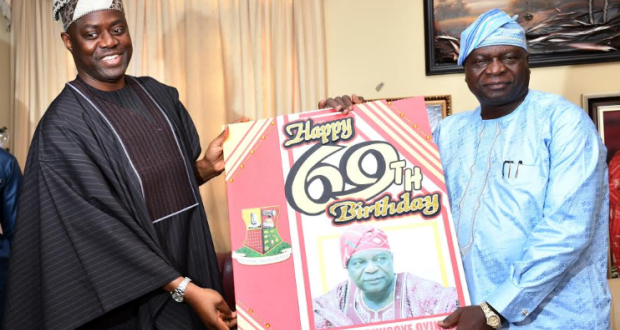 You are a strong pillar that is needed in PDP, Makinde tells Oyinlola

Oyo State Governor, Seyi Makinde, on Monday extolled the virtues of a former National Secretary of People’s Democratic Party, Prince Olagunsoye Oyinlola, saying the former Governor remains a strong pillar that is needed in the PDP.

Governor Makinde, who was in company of national officers of the PDP as well as some leaders of the party in the Southwest geopolitical zone and members of his cabinet, said that though the visit was all about Oyinlola’s 69th birthday celebration, the former Governor remained one person he would like to return to the PDP.

He said that Oyinlola possesses the qualities and credibility of a leader who can pull every member of the oppoaition party together in the Southwest.

Governor Makinde, who described Prince Oyinlola as his elder brother and uncle, said: “I bring you greetings from the Government and the people of Oyo State and on their behalf, I want to wish you a happy birthday, many happy returns in good health.

“If not for the assignment that I was given in Edo State to go and conduct the ward congresses over the weekend, I would have been here for the golf invitational. As much as I miss that, I believe that we will find time to come later to play with you, Sir.

“I came with the heart of our party, PDP. You have been there and you once occupied the exalted position of the National Secretary of that party. You were a strong pillar in the South-Western region of Nigeria.

“If you ask me about the individual that I want his presence back in PDP in this Southwest; someone who can lead us and pull everybody together, you will be my number one candidate.”

Also speaking, the National Publicity Secretary of the PDP, Mr. Kola Ologbodiyan, felicitated Oyinlola, while also commending the role played by Governor Makinde for bringing the national leadership of the PDP to celebrate with the former National Secretary of the party and receive his elderly blessings.

Ologbodiyan said: “The national chairman unavoidably and for very obvious reasons had to travel out when contact was made to the leadership, but the national organising secretary quickly put together all national leadership members of the national working committee, who are currently in Abuja.

“We’re grateful to identify with a former national secretary of our party, who at a time rendered services that stabilised the party nationwide. Today, God through His grace and mercies has made you to see the very ripe age of 69 and counting, you are just knocking on the doors of 70. We’re going to be here with you at 70 Sir. And we’ll be here with you at 80 and I want to believe even at 90.

“To say very few words, we inherited a coordinated Secretariat of the party and leadership of the party courtesy of the services that our leader here and his likes rendered to the party. It made a lot of the jobs easier for us.

“When I see the seamless way the national organising secretary is conducting the affairs of the national organising department, I see why it was easy that our elder brother and our father and leader here, Prince Oyinlola coordinated the activities of the main Secretariat of the party and the simple answer to it is the primary constituency they’re coming out from: the military.

“So, we’re deeply really very grateful for having this opportunity to thank God and his Excellency, extended to the Secretariat to be with him this evening. Our prayer is that God will see you in great health. We want to ask again that we’re your children, this is where you left; continue to be available for us to tap from your experiences, because we know the times are challenging and we need the wisdom of the elderly, particularly those who have passed through this road.”

Ologbondiyan urged Oyinlola to always make his doors open to the party, noting that the national leadership of the party would continue to knock on his doors for wisdom and experience.

In his response, Prince Oyinlola said he was overwhelmed by the display of brotherhood and cordiality extended to him by the Oyo State Governor, noting that there would be avenues for further talks and that whenever he was going to make a decision on where next he would be going politically, it would be in the open.

The former Governor said: “I must confess that I am indeed overwhelmed by the gesture of brotherhood as demonstrated to me. I say this because it is coming from an unexpected quarter. Ever since we came across each other, he has shown that it does not matter where he belongs. The relationship has always been cordial. Truly, I belong to an opposition party but he has never, at any time, failed to accord me on the level of respect wherever we met.

“I was not with him when he was campaigning to become the Governor of Oyo State. The Coalition of United Political Parties (CUPP), which I led, supported the candidature of the PDP at the national level but when Governor Makinde became the Governor of Oyo State, he never cease to show me respect. I believe that relationship starts with the way you conduct yourself one on one, and that is why I really feel humbled by your presence and entourage. May the good Lord continue to honour you.

“In his speech, I picked one or two things. One thing you must understand is when you see an animal that says it does not love food and anytime you see it moving close to the food, there is a relationship. I must confess to you that whatever it is that I have achieved as a politician was on the records of the PDP.

“I wanted to become a senator because when I returned from my school in Buckingham, having studied law, I felt the best place to make use of my training was in the Senate. So, I continued to work on that. One thing led to the other and I became Governor on the platform of the PDP. “After my service as Governor, I was elected to be the secretary of the party.

“If I must confess to you, indiscipline and not fearing God started the crisis in the PDP. It is rather unfortunate that it started with me. Why did I say so? I was duly elected as secretary and, overnight, I was no longer the secretary. Some people felt it was injustice and could not let it go. One thing led to the other and before we knew it, seven governors came together and decided that they would leave the party. In fact, the movement was to serve as a scare-crow.

“We wanted to give them the fear so that they would call everybody to discuss the problem and settle it amicably. But sentiment came from the leader and he said the agitating Governors had no electoral value. Having said that seven serving governors lacked electoral value was the height of arrogance and lack of belief in the Lord.

“I want to pray that God will steer a new course, new belief, new discipline and the fear of the Lord in the party, and the party will get there.

“In a radio interview, I was asked where I was and I told them ADC. They asked me where I would go if I were to leave ADC. I said I didn’t know where it would be but definitely not APC. I said it and I know why I said so because I know when a wife has married two husbands.

“For the sake of today, I thank you and your entourage for honouring me. It takes a Christian mind of yours to remember that there is somebody somewhere who was part of you and feel you should celebrate on a day like this. We had an association with many other people but it never occurred to them. But for you to leave Ibadan and come with your people, it is a great honour and I know it. There will be time to talk further.