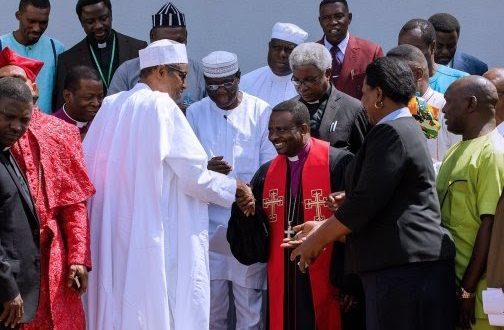 Presidential spokesman, Femi Adeshina has heavily berated Christian Association of Nigeria (CAN), over its recent statement on the killing of CAN Chairman in Adamawa State by insurgents

The presidency accused the Christian body of being acting and reacting more like an Opposition Party on national issues.

CAN, in reaction to the beheading of its chairman in Michika Local Government Area of Adamawa, Rev Lawan Andimi on Tuesday by Boko Haram insurgents, lampooned the federal government for the growing attacks on Christians in parts of the north.

Reacting to the accusations, the Presidential spokesman, Femi Adesina, in his debut weekly column titled From The Inside on Friday described CAN’s reactions as divisive and unworthy of a Christian group.

Adesina, a Pastor with the Foursquare Gospel Church Nigeria, accused CAN of fuelling the old-time demonisation of Buhari, stating that security has improved with the current administration.

According to him: “If any purging is to be done, is it not by those making allegations? The allegations lasted for many years, but truth eventually overtook them.

“If CAN would then still dwell on the discredited accusations, it must be the one to purge itself, as millions of Nigerians, including Christians, have already done. The insecurity in the country is not about any religion. It is pure evil, from the pit of hell.”

He faulted CAN’s allegation that a change of Service Chiefs would address insecurity while also dismissing claims that the heads of security organisations were deliberately picked from a section and religion to give undue advantages.

Adesina wrote: “And then: …purge himself of the allegations…by reconstituting the leadership of the security forces. CAN, oh CAN, in a condolence statement?

“Are you saying under a different leadership of our security forces, insurgency will vanish after they wave their fingers? Why mix the wheat and chaff together?

“In the leadership of the security forces as we have it now, is the position of Chief of Defence Staff not held by General Abayomi Olonisakin, who is also a pastor? Is he not a member of CAN? Is the Chief of Naval Staff, Ibok Ekwe-Ibas, not a Christian, and under the banner of CAN?

“Listening to the organisation, you would think not even half a Christian is in the leadership of the security forces. This kind of sentiment breeds hatred and malice in a country, and CAN should not be involved in such, for Jesus would not do it. And we’ve been called to walk in His steps.

“If the leadership of the security forces would be changed, it is a sitting President that has the prerogative. It will not happen when CAN begins to make such demand in what should be a sober condolence press statement. Don’t mix bias and sympathy. They don’t mesh.”

He accused CAN of sowing the seed of discord, hatred and division in the country, describing its response as shameful and ridiculous.

Adesina argued: “CAN says kidnappings and killings are shameful to a government that boasts that it has conquered insurgency. Boasts. So that is all that matters to CAN, as if it was an opposition political party? Boasts. No.

“This would not augur for unity and cohesion in a country. We are not asking the Christian body to be in bed with government, that would not help anybody, but the organization has been sounding too long like a political party. We daily learn to walk with Jesus.”

The Christian body, according to him, has not followed the dictates of Christ in response to public affairs, urging it to stick to praying and offering constructive criticisms based on utmost honesty, The Nation reports.