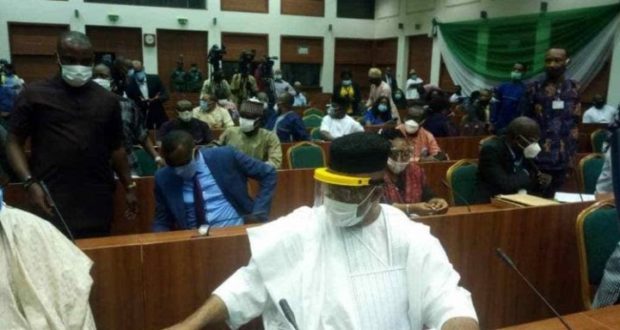 “You are the ones getting most contracts in NDDC,” Akpabio tells NASS members

The Minister of Niger Delta Affairs, Godswill Akpabio on Monday made a weighty allegation against National Assembly members.

He said that the majority of the contracts awarded were handled by the lawmakers.

He made the revelation while answering questions at the ongoing probe by the House of Representatives committee.

According to Akpabio: “Most of the contracts in NDDC are given out to the members of the National Assembly. If you don’t know, please ask the two chairmen.”

Akpabio further explained that some Chairmen of committees on NDDC have slots in the budget.

He was, however, stopped from making further comments by some members, who were shouting “order, order.”

The House of Representatives is currently investigating NDDC over alleged fraud, mismanagement of funds, among others

Previous: Ondo 2020: God will make a way for me, says gov Akeredolu
Next: Ondo Guber: Entrance of dep gov to PDP not a threat to me- Top aspirant