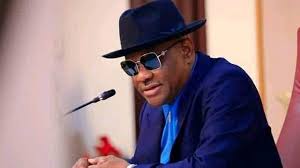 The group linked Wike’s comment to his presidential ambition, saying that the Governor should use the NBA as a ladder to achieve his political ambition.

Akpata revealed several instances where the body had risen in defence of the judiciary, including when it fought in the cause of recently retired Supreme Court Justice Mary Peter-Odili, the Chief Judge of Cross River State, Justice Akon Ikpeme and Justice Inyang Ekwo of the Federal High Court.

He said Wike’s forgetfulness of these and more, suggested “a dissonance that is most disconcerting and should give one serious cause for concern,” especially as the Rivers governor is a “senior member of the Bar.

It will be recalled that Wike, spoke on Tuesday during a book launch in honour of Justice Peter-Odili, where he said, that the NBA had become a “paper tiger” that had not only failed in its responsibility to protect the Judiciary in Nigeria, but had also been unable to rescue it from political intimidation.

The NBA responded to Wike in a statement by Akpata, seen titled: “NBA HAS FAILED TO PROTECT THE NIGERIAN JUDICIARY- MY RESPONSE TO GOVERNOR WIKE’S DIATRIBE”.

Akpata said: “As President of the NBA, it is not usual for me to respond to criticisms regarding the activities or performance of the NBA, and indeed our philosophy has been to welcome all such criticisms and take useful lessons therefrom. But I am unable to allow the Governor of Rivers State make such baseless allegations against the NBA particularly as he is a senior member of the legal profession who will be presumed by many to be speaking from a position of knowledge.

“It is indeed quite ironic that Governor Wike made these unfortunate statements at an event held in honour of the Honourable Justice Mary Peter-Odili in support of whom, the NBA stood firm in the face of that brazen attack on her home in Abuja by some persons who are now standing trial in our law courts. That Governor Wike has chosen so quickly, to either forget or ignore this and other actions of the NBA in support of the Judiciary is suggestive of a dissonance that is most disconcerting and should give one serious cause for concern.

“It is very convenient for Governor Wike to ask Nigerian lawyers (as he did at the Book Launch) to emulate their apparently more courageous Pakistani colleagues when the issues at stake do not concern him directly, but when in 2019 the very same Nigerian lawyers had the “temerity” to question his handling of the security situation in Rivers State and threatened to boycott the courts if there was no abatement of the rising insecurity in the State, he was only too quick to lambast the lawyers and to withdraw his “support” for the NBA in the State.

“While we understand that Governor Wike is currently on the political soapbox and, like a man with the proverbial new hammer, to whom any and everything is a nail, he will latch unto any chance to sell his candidacy, he cannot and should not be allowed to use the NBA as fodder of any sort for his vaulting ambition.”

He said the politico-legal history of Nigeria is replete with the commendable role that the NBA has played, and continues to play, as a primary defender of the rule of law and protector of the Judiciary in Nigeria.

Akpata noted that “While the NBA might have at different points dithered in playing these roles, the NBA is not known to have shirked that responsibility in recent times. Our commitment to defend the Judiciary and its integrity has remained unshaken and the NBA has been making spirited efforts to discharge that responsibility creditably in the less than two years since this administration of the NBA assumed office. Illustrative examples abound to drive home this point, and three well-known examples remain fresh in the consciousness of Nigerians and constitute recent history that cannot be rewritten even by a personality of Governor Wike’s calibre.”

He listed several instances of the NBA’s efforts, including “Firstly, there was the crisis that rocked the Cross River State Judiciary when, against established legal tradition, the Governor of the State refused to appoint the most senior Judge in the State – Justice Akon Ikpeme – as the substantive Chief Judge on the ground that she was not an indigene of Cross River State.
That was an attempt by the executive arm of government to extend its political turf to the Judiciary, and the active role that the NBA played both publicly and privately in defending the Judiciary and resolving that ugly debacle in that State (and a few other States where similar scenarios played out afterwards) is well-documented.

“Secondly, Nigerians would recall how the NBA swiftly rose to the defence of Mary Peter Odili JSC (rtd) in particular, and the Nigerian Judiciary in general, when the former’s residence was invaded by rogue officers of the security agencies. The NBA’s fierce opposition to the illegal invasion also included the appointment of a Special Investigator to unravel those behind the illegality. That the Special Investigator, after an extensive fact finding process, did not find the executive culpable is indicative of the fact that his appointment was not intended to achieve a contrived end, and should not be interpreted as the NBA being a “paper tiger”.

“Also fresh in our collective memories is the NBA’s defence of Honourable Justice Inyang Ekwo of the Federal High Court who was wrongly excoriated by His Excellency Engr. Dave Umahi, Governor of Ebonyi State after an unfavourable judgment was entered against the Governor. The NBA’s defence of the Judiciary in that case would later result in an almost immediate apology by the Governor.

“More generally, the NBA has at different times in the last 20 months, filed public interest lawsuits to challenge the excesses of the Government and its agencies; issued strongly worded statements and reprimands in which it named and shamed political leaders with despotic and undemocratic tendencies; initiated a process to enthrone the appointment of only the best from amongst us as Judges; and even joined in a ten-week long strike action (with significant economic loss to our members and other debilitating effects) in a bid to contribute towards our quest for a more independent and efficient Judiciary in Nigeria.

“Short of taking the law into our hands and carrying ammunition without licence to defend the Judiciary, the NBA insists that it is doing its best in the circumstance, and in an atmosphere that is widely acknowledged to be characterised by recklessness and little regard for the rule of law by governments at all levels. It is in this respect that the NBA views Governor Wike’s invectives as inconsiderate and uncharitable.”

Akpata conceded that there is room for the NBA to do more in maintaining and defending the integrity and independence of the Judiciary.

Nevertheless, be argued that it would be “mean-spirited to make such far-reaching and ridiculing statement about the NBA, at least given its engagements and activities in defence of the Judiciary since August 2020 when the current leadership assumed office.

“The NBA would continue to do all that it can to defend the Judiciary, the rule of law and indeed, Nigeria’s democracy. We will not pass that buck.”