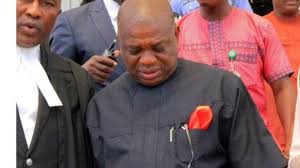 You lost, but you fought gallantly- Kalu lauds Wike

The Senate Chief Whip declared that “Wike is the winner of the game for defying all odds to come second”.

In a Facebook post, Kalu said though he’s a chieftain of the All Progressives Congress (APC), Wike deserved accolades.

The former Abia Governor commended the “performance, tenacity and courage” of the Rivers helmsman.

“He lost, but he fought gallantly. I congratulate and commend his doggedness at the just concluded PDP presidential primaries”, he added.

On Monday, Atiku visited him and other contestants, including Bukola Saraki and Anyim Pius Anyim, in Abuja.

The party chieftains were said to have agreed to work together to retake power from the APC.

The ruling party will conduct its presidential primary this weekend

Previous: How Sen Teslim Folarin, others planned to assassinate me- Shina Peller
Next: APC Primaries: How they almost killed me- Ondo Speaker