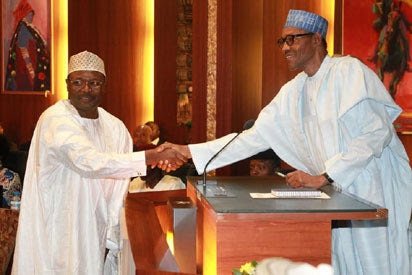 “You must be fair, don’t give room for manipulation of elections”- Buhari tells INEC

President Muhammadu Buhari has called on the Independent National Electoral Commission (INEC) and the police not to give room for manipulation of the forthcoming rerun elections.

A statement by Femi Adesina, presidential spokesman, said Buhari spoke while meeting with Mahmood Yakubu, INEC chairman, Mohammed Adamu, inspector-general of police, and other officials of the electoral body at the state house, on Tuesday, in Abuja.

The outstanding 28 rerun elections will be conducted on January 25, The Cable reports.

The president expressed his determination to give Nigeria an electoral system that meets global standards.

He said INEC must ensure that the elections are conducted by the rules without fear or favour.

He asked the electoral body to stick to the rules of fair play, free and credible elections with no room for manipulation.

“Those that you declare as winners must be the candidates that the people have chosen,” Buhari said.

“Democracy is about free will, and the will of the people must be allowed to prevail. Get your acts right, and leave no room for underhand tricks or manipulation.”

The president said the elections must be conducted in a violence-free environment, without any form of intimidation or favouritism by the police.

“Our elections must be done in violence-free atmosphere. The process must be free, fair, decent, devoid of intimidation or malpractices,” he said.

“It is the duty of the police to accomplish that, and it is what I expect in the elections immediately ahead, and going forward.”

Responding, Yakubu said the commission was ready to conduct the rerun elections.

On his part, the IGP promised that the force would provide the needed security during the polls and the subsequent governorship elections in Edo and Ondo states.

Adamu said the security strategy put in place during previous elections would be reviewed in order to have an election devoid of violence and ballot snatching.

He said: “This is the message that we are sending to Nigerians and this is the beginning of the process to make sure that this country from now onwards gets elections that is exemplary to the rest of the world.

“The security agencies have also assured that they will continue to secure the environment to ensure that we conduct a free and credible election. “