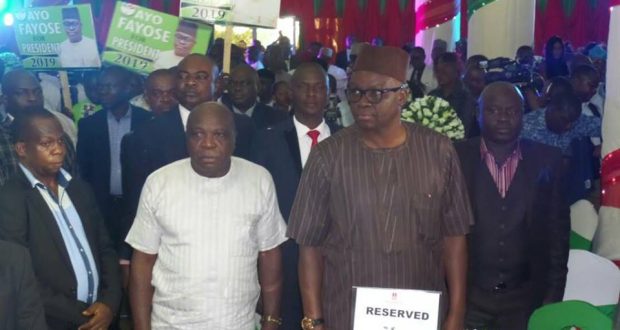 Your Administration Is Laden With Scandals, Fayose Attacks Buhari

Governor Ayodele Fayose of Ekiti state has again condemned the President Muhammadu Buhari-led administration, describing it as “a government of scandals.”

Leading the criticism with the other governors on the platform of the (Peoples Democratic Party (PDP), Governor Ayodele Fayose urged party members to continue to speak up on the failings of the All Progressives Congress ( APC) administration because “if we don’t expose them, nobody will do so.”

Speaking on Tuesday during the party’s 76th National Executive Committee (NEC) meeting which held at its national secretariat, Wadata Plaza, Fayose waved off the anti-corruption war of the Buhari administration as a case of armed robbers condemning perceived thieves.

“The APC is now in many scandals; we have to our voices up, to expose them. Armed robbers calling people thieves, who are the armed robbers now?