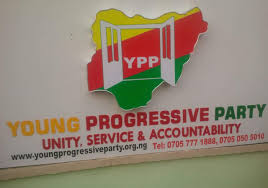 YPP vows to wrestle power from APC in Kwara

Young Progressives Party (YPP) has vowed to take power from the ruling All Progressives Congress (APC) in Kwara state and by extension Nigeria.

The remark was made by the National Secretary of the party, Vidiyeno Bamaiyi, in Ilorin, Kwara State capital, while monitoring the ward and local government congress of the party in the state.

Bamaiyi said the party has what it takes to take over the leadership of the country.

He added that the party had embarked on ‘ballot revolution’ ahead of the 2023 general elections with massive sensitization of young people to change the narrative.

Bamaiyi also explained that the ‘ballot revolution’ is not a bloody one, but all about preparing the minds of young people in the country to get into mainstream politics and supporting themselves to take over political leadership at all levels through the ballot box with their vote card and determination to change the old guards

Bamaiyi called on the youths to take their destiny in their hands, by registering for the Permanent voters card which will afford them the opportunity to participate in the 2023 election.

He said young people should not allow themselves to be toyed and deceived by politicians who do not mean well for the country with evidence to show their actions towards young people.