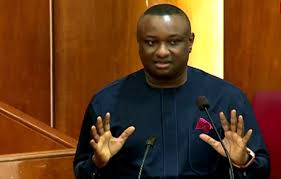 Zamfara: Atiku didn’t resign when he dumped PDP when he was Obasanjo’s VP- Keyamo

The National Publicity Secretary Kola Ologbodiyan had demanded the resignation of Matawalle for defecting to the All Progressives Congress (APC).

The spokesman further cautioned banks and other financial institutions to be wary of financial transactions with Matawalle.

The PDP insisted that the Deputy Governor, Mahdi Aliyu Gusau, now holds the Zamfara governorship mandate and ought to be accorded the protection and privileges due the office of Governor.

The formal process for Gusau’s official declaration as substantive helmsman of Zamfara has commenced at the Federal High Court.

In a statement, Keyamo said to give its illogical assertions some veil of constitutionality, the PDP relied on Section 221 of the 1999 Constitution (as amended) as well as the judgment of the Supreme Court in Faleke v. INEC.

He told the party that the Supreme Court decision in Faleke v. INEC does not relate to the consequence of the defection of a Governor from one political party to the other.

The Senior Advocate of Nigeria (SAN) said a more apt instance is the Atiku scenario wherein as VP, elected under the PDP, defected to the then Action Congress (AC).

Keyamo recalled President Olusegun Obasanjo attempted to declare his office vacant in circumstances similar to the Zamfara scenario and the dispute ended in court.

“I was part of the legal team at the time. It is trite that under the 1999 constitution, provisions relating to removal of the President/Vice President are replicated with respect to Governors/Deputy Governors.”

He cited the position of the Supreme Court was reported as ATTORNEY GENERAL OF THE FEDERATION V. ABUBAKAR (2007) 10 NWLR (PART 1041) 1.

At page 124 of the eport, Justice Walter Onnoghen said there is no where in the 1999 Constitution where it is stated that the President or Vice President shall be removed from office if he/she joins another political party.

The former Chief Justice of Nigeria explained it is the responsibility of the Legislature to make or amend the laws, where the need arises, while the judiciary interpret and apply the laws.

Previous: 2023 Presidency: North will rule for another four years after Buhari- Arewa Youths
Next: Kwara Assembly suspends only PDP member in the house over alleged contempt