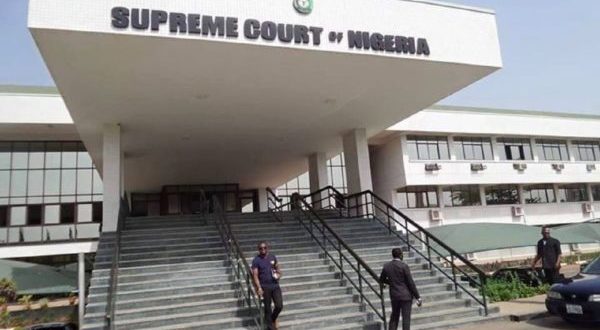 The Supreme Court has set Friday for verdict in an application by the Abdulaziz Yari faction of the All Progressives Congress (APC) for a review of its May 24, 2019 judgment in the intra-party dispute in the Zamfara APC.

The Supreme Court had ruled that the APC did not hold valid primaries preparatory to the 2019 general election, voided its (the party’s) victory in the elections and made a consequential order, directing the party with the second highest scores in the election to claim the victory.

The Peoples Democratic Party (PDP) in Zamfara State benefited from the effect of the consequential order, with its candidate taking over all the elective positions in both the Executive and Legislative arms of government in the state.

While arguing the application on March 17 2020, lawyer to the Yari faction of the Zamfara APC, Robert Clarke (SAN), prayed the court to review the consequential order on the grounds that it was wrongly made.

Clarke argued that the order the Supreme Court ought to make was that directing the APC and INEC to conduct fresh primaries and elections in Zamfara State, instead of voiding the party’s victory.

He argued that, by the consequential order, the Supreme Court made it possible for the PDP, which was not a party in the Zamfara APC’s intra-party dispute, to benefit from the outcome of the dispute.

Clarke argued that when the Supreme Court sat on the date it gave the judgment, the case was purely a pre-election matter, not an appeal from the lower court, flowing from the tribunal.

“There was no tribunal in place to hear post-election matters, because election had not been held. The Supreme Court was sitting, at that time, as a court of first instance.

“Section 235 of the Constitution, says only the tribunal that can decide electoral dispute, in this case, there was no appeal on election dispute.

“The consequential order allowed non-parties to benefit from the outcome of the intra-party dispute between members of the APC.

“The other party that benefited from the consequential order (the PDP) was never a party to the Zamfara APC’s intra-party pre-election dispute. The court should grant the application in the interest of justice,” Clarke said.

In a counter-argument, lawyer to the Senator Kabir Marafa. faction of the APC in Zamfara, Mike Ozekhome (SAN), urged the court to dismiss the application with punitive cost.

Ozekhome argued that, not only is the application without merit, it constitutes an abuse of the process of the court.

He added that with the recent two decisions of the Supreme Court, in the governorship disputes in Bayelsa and Imo states, the applicant ought to have quietly withdrawn the application.

Ozakhome said; “On June 17, 2019 the same applicant made similar application that was struck out by this court on July 22, 2019, the two main reasons given by the court included that ‘because the applicant did not comply with Order 8 Rule 16 of the Court of Appeal Rules.”

He added that the court rejected the current appellants’ application because the matter complained about was a pre-election matter which had been overtaken by Section 285(12) of the Constitution, which prescribed 60 days from the day of filing of notice of appeal.

Ozekhome noted that ‘”nothing has changed since the last ruling of the court for them to come back with the same application.”

Lawyer to the Independent National Electoral Commission (INEC), Tanimu Inuwa (SAN) said his client did not file any brief and has nothing to urge the court..