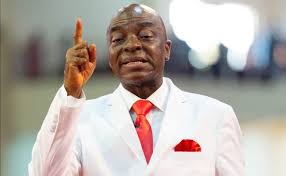 2015 Poll: I warned Nigerians when I saw Buhari coming with a bloodthirsty god- Oyedepo

Bishop David Oyedepo, Founder of Living Faith Church Worldwide, known as Winners Chapel, has claimed that some people are sponsoring Fulani herdsmen to unleash mayhem on innocent citizens of the country.

It will be recalled that some daredevil gunmen during the weekend attacked a branch of his church in Kogi State and abducted three worshippers.

When the criminals stormed the church’s premises in Osara community, along Lokoja-Okene road in Adavi Local Government Council of the state, some of its members were rehearsing.

It was learnt that the suspected bandits were shooting sporadically before whisking the victims to an unknown destination.
Reacting to a video which has now gone viral on social media, Oyedepo declared that “any gang up against this church crashes within one hour”.

The fiery pastor also claimed that he would reject the office of presidency if offered, warning it to steer clear of his church.
He said, “Fulani herdsmen have become a menace. They are sponsored. I know it. There are things you think in your room that the Lord shows his prophet.

” I saw this government coming in with a bloodthirsty god and I cried. The worst time in the history of Nigeria was from 2015 till now. And it is worsening day by day. The end has finally come.

” Apart from us in the Jesus family, many have never had a smile in the last five years on our street. We don’t have a record, so we don’t know how many people have committed suicide.

” If they dash my presidency, I won’t take it. I knew that since 1984, but not now. It is a great office but not my calling. However, this my calling doesn’t come near. Any gang up against this church crashes within one hour”.

Previous: Kaduna LG Poll: Community heads, political parties, others sign peace accord
Next: Buhari wants to use sacking of Ministers to cover up his failures- PDP