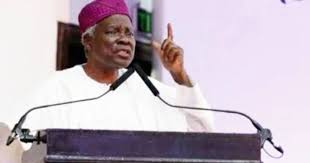 2023: All political parties should stop preparations for elections- Yoruba group

A group of self-determination activists under the aegis of the Nigerian Indigenous Nationalities Alliance for Self-Determination on Tuesday warned all political parties to stop preparation for the 2023 elections.

The alliance stated this at a press conference in Lagos after the 120-day expiration of the Constitutional Force Majeure Notice to states in the South and Middle Belt of Nigeria and One Million March to the United Nations General Assembly in September.

Akintoye, who is the chairman of NINAS, declared that all lawful means would be used to ensure that the 2023 general election did not hold unless the Federal Government agreed to hold a referendum for the “aggrieved indigenous nationalities” to decide whether they wanted a federation known as Nigeria.

Calling for the complete abolition of the 1999 Constitution, NINAS described it as an agent of slavery and fraud, promoting injustice, under-development, and impunity in the South and Middle Belt of Nigeria.

Akintoye, whose speech was read by an activist, Dr Don Pedro Obaseki, at the event, asked political parties to “save Nigerians from slavery by refusing to submit candidates for the 2023 general elections in order to halt the 1999 Constitution of Nigeria being used to renew the woes currently battling Nigeria in all fronts.”

Excerpts from his speech read, “It is no longer a matter for debate that the 1999 Constitution is a fraud and a forgery that is directly responsible for practically all the miseries tormenting Nigerians, including the killings, mass poverty, gross insecurity, and general hopelessness, now leading to the demise of the Nigerian Union itself. It does not matter, therefore, which political party or which individual wins power; that constitution guarantees the evils we lament.

“It is no longer a matter for debate that elections are the mechanism by which the life of the 1999 Constitution is renewed once every four years. It follows therefore that those who are tormented by that constitution but who nevertheless accept to go to another round of national elections under that constitution are the ones renewing and reinforcing their own damnation, bondage, and enslavement.

“It is now, therefore, a matter of choice whether we want to renew the source of our miseries once again in 2023 or we want to free ourselves by rejecting now in 2021 the invitation to join in the preparation for another round of national elections in 2023. These cycles of renewal must be broken if we must be free.

“The political parties have in this regard become the ‘Judas Goat’ that routinely leads us all to slaughter. The key to taking down the 1999 Constitution is by immediately halting the political parties from dragging us to another round of national elections in 2023. This is not a call to boycott the 2023 elections but to halt the preparations for 2023 inside 2021. Political Parties must now be persuaded to close shop forthwith.”

NINAS also urged all the people of the South and Middle Belt living in the United States of America and Canada to troop out to participate in the One Million March organised to hold in front of the United Nations General Assembly commencing from September 14 to 24 in New York, US.

“The march was put together to let the world know what we are going through in Nigeria’s quasi and expired federation. It is going to be an epoch-making event which we hope to be used to draw the attention of the world and global leaders to all that we have highlighted above,” the alliance said. Punch reports.