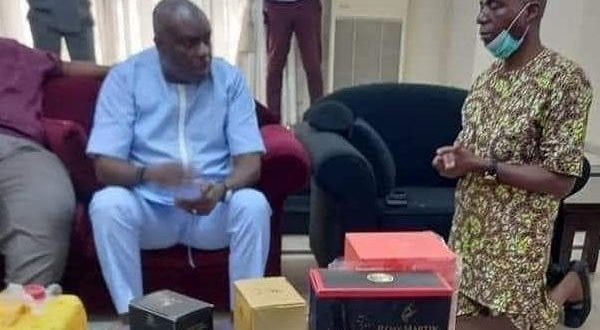 A Senator from Delta State, Senator James Manager, has been captured in a picture on his knees before a former Delta State Governor, Chief Onanefe James Ibori, most likely in his Oghara residence.

The Senator, currently represents Delta South Senatorial District in the Red Chamber of the National Assembly

In a report by an online media platform SaharaReporters, the 61-year-old senator who has been representing his constituency since 2003, in the picture, appeared to be begging Ibori, who is an ex-convict.

The Prime Chief ofTuomo Kingdom, High Chief Loyibo had earlier said that it was time for Urhobo and Delta people to give Ijaw people the chance to also produce the governor of the state.

It was gathered that Senator Manager is one of the candidates that Ijaw people are planning to push to be the state governor in 2023.

On Monday, July 12th, the National Chairman of Delta Central for 2023, popularly known as DC-23, Chief Ighoyota Amori, predicted victory for the members of the Ibori political family in both the governorship and other elections come 2023.

Amori made this known during a courtesy visit he made along with members of the group to a prominent Ijaw leader, Chief Mike Loyibo, in the Burutu Local Government Area, to solicit the support of the Ijaw for the emergence of an Urhobo ‘son’ as governor.

Amori disclosed that he had been in politics for long, saying he was the General Overseer of the James Ibori political family. He noted everyone that has become the state governor after Ibori, like Dr Emmanuel Uduaghan and Dr Ifeanyi Okowa are his brothers from the same family.

However, weeks after Amori’s comment, Senator Manager was seen on his knees at Ibori’s house.