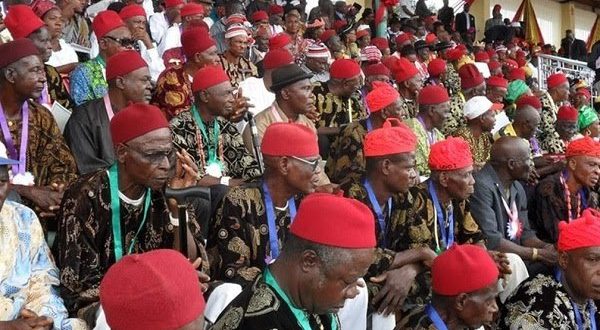 Ohanaeze Ndigbo Youth Council has asked major political parties to cede their presidential ticket to the South-East in 2023.

The group vowed that Igbos will have a rethink of the geo-political zone is not considered for presidency in 2023.

The group called on the two major political parties: the All Progressives Congress (APC) and the People’s Democratic Party (PDP) to ensure that they both present Igbo person to. to succeed President Muhamamdu Buhari in 2023.

In a chat with reporters in Abakaliki, Ebonyi State, the Secretary-General, Mazi Okwu Nnabuike, sounded a note of warning against those plotting against the zone

Acccording to him, anybody kicking against Igbo presidency is making a grave mistake.

“It is our turn. Anybody destabilizing any party because of our interest is making a grave mistake”, Nnabuike warned.

He added that the defection of  Governor David  to the APC,  should not generate uproar as it was.

He said that in a political scene, anybody has the right to take a decision he wishes.

“We want peace in the South-East region. The opinion of the Governor of Ebonyi State should be respected. He has chosen to go to APC, the stakeholders should allow peace to reign,”

Previous: 2023: It is to early to talk about my interest in presidency- Jonathan
Next: Lagos by-election: INEC expresses readiness as 12 political parties slug it out