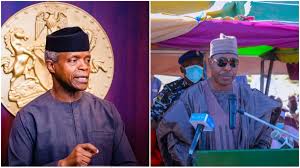 2023 Presidency: Why Osinbajo/Zulum combination will give victory for APC- Chieftain

A top stalwart of the All Progressive Congress (APC), Dr. Garus Gololo, has called on the party to field Vice President, Yemi Osibanjo, and Governor Babagana Zulum of Borno State, for the 2023 presidential election.

According to him, the fielding of the duo will give victory for the ruling party in 2023.

Speaking in an interview in Abuja on Friday, Gololo said Osibanjo has shown hard work and statesmanship to pilot the affairs of the country.

Gololo said, with dialogue and negotiation, power could rotate to the south, despite the fact that the north has the numbers, adding that the south might not pick it the way they are going about threatening the north.

“In politics, what you do when you want votes is to consult with people, dialogue and negotiate with them. For now, who are you fighting for? You can’t fight for Tinubu because already he is aged. He is already in UK hospital, do you want to be going back to London as we are going? We cannot take that thing again, we are okay.

“I can vote Osinbajo direct because he is a person of integrity, he is loyal to the president, he can do anything you think of and he is not biased. When he speaks anywhere, he represents Nigeria, not ethnic or parochial view. I respect him and can go with him.

“If Osinbajo is going with Zulum, before 12 O’clock, we would have seen the results. But if you pick Tinubu, who will he pair with? I understand he wants to run with Boss Mustapha, who lost his ward in Hong in 2019. His younger brother bought the form for State Assembly, but did not succeed, is that who will be vice president?”, he said.

On the agitation for power shift by the south and the attendant comments credited to Northern Elders Forum, Gololo threw his weight behind the north, saying the south should rather consult widely and dialogue with the north, rather than engaging in acts that would jeopardize their chances.

He said, “I am solidly behind them. I’m from the North. If you watch very well, the Governor of Ondo state, Akeredolu said if the party fails to zone the presidency to the South West, there will be no APC in 2023 in Nigeria. This is the same person, a sitting governor, who could not deliver his state to the president in 2019. A sitting governor who was defeated by PDP, and you are making this type of statement?

“He just entered politics by chance because he has no background, otherwise, he has no business in politics. Some of his utterances don’t make sense in politics. Party is supreme, no matter what. What matters in politics is whether you can deliver your ward. You cannot deliver your state as a sitting governor and you are saying there must be zoning. Zone to who?

“Left for people like him, Buhari would have lost the 2019 election. Already we know where we are going, we have the votes. Nobody can intimidate us using zoning. We have the votes and you have yours, let us go to the poll. We are not fighting, votes will determine who will be, simple”.

He stressed that “In politics if you have a candidate in mind you want to campaign for, you can go round, discuss with the people, hold meetings with the local community – the elders, youths, women. But you cannot come out directly, after signing “Anti-open grazing” law and talk of zoning. He signed Anti-grazing law, but he cannot sign votes, we will sign that for ourselves in 2023”.