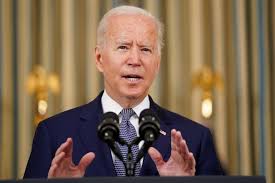 After humiliating saga in Afghanistan, Biden shifts to domestic affairs

President Biden is seeking to press his agenda on domestic issues and redouble efforts to combat the Covid-19 pandemic after the Afghanistan withdrawal saga.

The President has sought to place the spotlight on internal matters, including Friday’s underwhelming jobs report and recovery from Hurricane Ida.

Mr Biden is also visiting New Orleans on  Friday and making plans to travel to the New York metropolitan area on Tuesday to assess storm damage.

He is expected to focus heavily on his infrastructure and antipoverty legislation in the coming weeks, as Congress returns to Washington, as well as travel to California to campaign for Gov. Gavin Newsom, a Democrat facing a recall election.

The packed calendar comes as Mr. Biden takes bipartisan heat for the chaotic exit from Afghanistan.

It will be recalled that a few Republicans have said the president should be impeached, and Mr. Biden’s poll numbers have taken a hit.

Mr. Biden defended his approach in remarks to the nation and said he would bring remaining Americans in Afghanistan home.

The president said from the White House Friday that two tasks ahead in September are combating the Delta variant of Covid-19 and working with Congress to pass his agenda, saying the country is mot where we need to be in our economic recovery.

“President Biden desperately wants to talk about anything but Afghanistan, but Americans who are hiding from the Taliban, ISIS, and the Haqqani network don’t give a damn about news cycles, long weekends, and polling—they want out,” Sen. Ben Sasse (R., Neb.) said in a statement.

Polls show Mr. Biden’s standing has eroded as he has grappled with issues that are difficult to control: the Afghanistan withdrawal and the pandemic. An ABC News/Washington Post poll released Friday