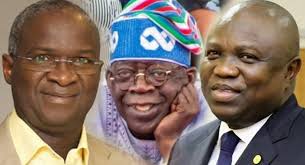 There is an old English proverb that says “A cat has nine lives. For three he plays, for three he strays, and for the last three he stays” Nine is also considered a magic number, which can also be the reason cats are attributed with nine lives. This is because a cat is seen as able to endure and continue or survive despite near encounters with death or disaster. Thus, the myth endures that cats have nine lives. Another popular idiom or proverb associated with cats is “Curiosity killed the cat” This also is to warn of the danger of unnecessary investigation or experimentation because it can lead to danger or spell misfortune.

That the erstwhile governor of Lagos State, Akinwunmi Ambode, missed out on a second term we all know. He was replaced by the current holder of the office, Babajide Sanwo-Olu. The effective kingmaker of Lagos, Asiwaju Bola Ahmed Tinubu, explained that whereas Ambode made a good governor, he was a very bad politician, hence the rug being pulled off his feet by fellow party leaders in the Lagos APC and the ticket given to Sanwo-Olu, who went on to win the 2019 Lagos State governorship election. Last week, however, an online publication quoted Ambode as speaking on the “real” reasons why he was denied the APC ticket. The former governor reportedly listed as follows the nine “sins” that he committed and which sealed his fate:

1) I constructed 22 roads in Alimosho and refused to award any of the contracts to Aregbesola and co.

2) I insisted that contracts that had been awarded to party leaders under Fashola must be executed before they can be awarded new contracts under my regime.

3) I wanted to phase out Danfos and Area boys from the streets of Lagos and introduce smarter means of transportation without Area boys and Agberos.

4) I refused to pad the budget with 10% for the House of Assembly members led by Bayo Osinowo and Mudashir Obasa.

5) I refused to grant the concession of the 4th mainland bridge to Tinubu’s Hitech.

6) I refused to increase the amount of money being paid from the state revenue to Tinubu through Alpha Beta from 10% to 20%.

7) I developed Epe. Epe was never in their master plan.

8) I refused to support Aregbesola and Bayo Osinowo’s senatorial ambitions because they are not Lagosians.

9) I refused to use Lagos state funds to finance Osun elections.

Now, let us take a look at the nine “sins” as reportedly listed by Ambode himself one after the other, to see whether or not he was justified in committing those “sins” and also to judge whether or not his party leaders were right to have skinned him alive.

One: He constructed 22 roads in Alimosho and refused to award any of the contracts to Aregbesola and co. I am not a fan of Aregbesola who left Osun state in tatters with his half-baked O-this, O-that nonsense; amassed a debt armada that generations of Osun citizens will pay through their nose; and almost set the state and, by extension, the entire Yoruba land, on fire with his self-inflicted Hijab controversy. So I think he should be answering questions at the EFCC instead of parading as a Minister of the Federal Republic. But Aregbesola is an APC leader, especially in the Alimoso axis of Lagos; a two-term Commissioner for Works in the same Lagos State, apart from being a two-term governor in Osun State. So, why did Ambode construct a whopping 22 roads in Alimoso but “refused” to award even one to Aregbesola? Is it that Aregbesola and his construction company were not qualified or the price was not right? If that was the case, say so and it would be okay but if it is a pure case of bad belle or political vendetta, that is not good enough.

Two: I insisted that contracts that had been awarded to party leaders under (ex-Gov. Babatunde) Fashola must be executed before they can be awarded new contracts under my regime: Excellent! One of the reasons why much of the razzmatazz about “Lagos is working” and this “Centre of Excellence” hogwash is all empty propaganda is because contracts are awarded and executed only on paper, apart from their being ridiculously over-invoiced. Anyone who got contracts and failed to execute should not only be denied a new contract but should be made to face the music.

Three: I wanted to phase out Danfos and Area boys from the streets of Lagos and introduce smarter means of transportation without Area boys and Agberos: Great! Anyone who stopped Ambode from doing that is in league with Muhammadu Buhari who, as military dictator, stopped the late Gov. LK Jakande’s metroline project in Lagos. A mega city, which Lagos parrots, needs smarter means of transportation on land, air, and sea than the “Ojuelegba confusion break bone” dysfunctional system (apologies to Fela) that we have at the moment. The billions of Naira being channelled into the pockets of “Agberos” should significantly add to Lagos IGR.

Four: I refused to pad the budget with 10% for the (Lagos State) House of Assembly members led by Bayo Osinowo and Mudashir Obasa: Kudos, Ambode! Unfortunately, Bayo Oshinowo is no more for him to answer to this allegation but Obasa is. Not long ago, tongues wagged and corruption allegations hovered around the same Obasa/Lagos State House of Assembly. So, over to you, EFCC! Padding of budgets is an offence under the law.

Five: I refused to grant the concession of 4th mainland bridge to Tinubu’s Hitech: Why, if I may ask? Is it that Hitech was not qualified or that the price was not right? If yes, say so and you will be justified; otherwise, it would be audacity of the highest order and curiosity, the type that killed the cat, for Ambode to poke his finger in the eyes of Tinubu, the man who single-handedly picked him up and made him governor in the first place.

Six: I refused to increase the amount of money being paid from the state revenue to Tinubu through Alpha Beta from 10% to 20%: Excellent! Not long ago, I read about controversies swirling around Tinubu, Alpha Beta, etc, which reportedly have become a subject of litigation. My suspicion is that tax collection in Lagos is mired in a miasma of corruption. Only a measly amount is declared as IGR while humongous sums end up in private pockets. The entire system of tax collection has to be shaken up such that much of what is collectible is collected; that much of what is collected goes into government coffers and not private pockets; and, finally, that taxes so collected are judiciously spent to provide quality services that will turn Lagos truly into a mega city and not the glorified slum that it is at the moment.

Seven: I developed Epe. Epe was never in their master plan: For goodness sake, why should anyone not want to develop Epe? Is Epe not part of Lagos State? Or was this a case of some people feeling that because Ambode comes (?) from Epe, he gave the place more than necessary attention? Was he guilty of nepotism like Muhammadu Buhari?

Eight: I refused to support Aregbesola and Bayo Osinowo’s senatorial ambitions because they are not Lagosians: I support that public funds should not be used by those in office to prosecute elections. I also think we should be sensitive to the cries of marginalization by the indigenes of Lagos. But is Ambode himself from Lagos? Some say he is Ilaje (from riverine Ondo state).

Nine: I refused to use Lagos state funds to finance the Osun election: The Osun election referred to here is that of the incumbent Osun state Gov. Gboyega Oyetola, said to be the son of Tinubu’s sister. If only we get to know the quantum of Lagos State funds wasted on elections all over the country, including the 2015 and 2019 presidential elections that have brought no benefit to Lagos, we will shed tears for Lagos! But, then, how was Ambode’s own election funded in 2015? Can this, then, be a case of the pot calling the kettle black?

Ambode was not a saint; no one is! Nevertheless, he made significant contributions during his tenure as governor of Lagos State. He was right on point on some of the decisions over which he was roasted by his party leaders. On some others, however, he stretched his luck too far and should have been more circumspect since he is not a cat with nine lives. I am grateful to Ambode for starting the Pen Cinema flyover project and to Sanwo-Olu for completing it because I live in that axis.

Previous: APC expels party Chairman in Adamawa for saying Osinbajo should succeed Buhari
Next: 2023 presidency: I am not interested in contesting, Akeredolu denies campaign posters