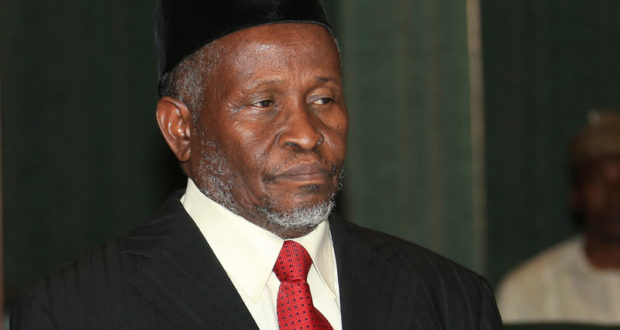 Senchi held that the suit filed by Tochi Michael, a 46-year-old man sometimes in April, ought to have been filed before the court by way of writ of summons and not originating summon.

The Judge also held that there was no evidence before the court to prove Michael’s case that Justice Mohammed reduced his age from Dec. 31, 1950 to Dec. 31, 1953 as claimed by the plaintiff.

“There is nowhere in the document before the court where the claimant have been injured by the defendant, the claimant also did not disclosed further much information about himself.

“Where a suit was not commence with due process of the law, it was quite clear that this suit was commence by way of originating summon instead of writ; the claimant has failed to show to the court necessary document to show that the defendant falsified his age

According to the Judge, the attitude of the claimant counsel, Mr Melkizadeck Zaro is nothing but to scandalized, malign and destroy the person of the CJN and the entire judiciary.

The Judge also ordered that the registrar of the Supreme Court should commence a disciplinary action against the claimant counsel for supplying false information to breach the law.

Justice Senchi also awarded a N10 million fines against the claimant to serve as a deterrent to others who are bent in carrying false information and must be paid within three weeks from the day of the judgment.

The News Agency of Nigeria (NAN) reports that Tochi Michael in his originating summon with suit No. FCT/HC/BW/CV/79/2019, alleged that the CJN deliberately falsified his date of birth.

Michael alleged that the CJN falsified his date of birth from Dec. 31, 1950 as contained in all his official records including that of WAEC to Dec. 31, 1953 upon his appointment as a judicial officer.

The petitioner in the originating summon is praying the court to determine whether such act of the CJN does not constitute a criminal act of perjury, falsification and forgery.

Michael in the originating summon also prayed the court to determine whether by falsifying his date of birth from Dec. 31, 1950 to Dec. 31, 1953 upon being appointed to Nigeria Bench as a judicial officer he has not breach the constitution of the Federal Republic of Nigeria.

The petitioner is also praying the court to determine whether Justice Mohammed has not breached the Code of Conduct for judicial officers and consequently brought the image of Nigeria Judiciary to a state of disrepute and odium.

He is also praying for an order directing the Inspector General of Police (IGP) to prosecute the defendant for the offence of perjury and an order which the court may deem it fit.

But the CJN counsel, Mr Sam Ologunorisa, SAN, had informed the court that the plaintiff and his counsel information against the CJN was not true and urged the court to dismiss the suit.

Previous: Oshiomhole responsible for 96 percent of APC’s failure, he should go- APC group
Next: Breaking: Sanwo-Olu appoints Tayo Ayinde as Chief of Staff