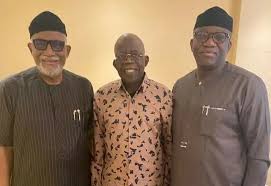 Ekiti State Governor, Kayode Fayemi and his colleague from Ondo, Rotimi Akeredolu on Wednesday visited the national leader of the All Progressives Congress Bola Tinubu in London, UK.

Tinubu’s media aide Tunde Rahman shared a photo of the governors with the APC leader on his social media platform.

“Governors Akeredolu and Fayemi when they paid a call on Asiwaju Tinubu in London…this Wednesday,” he wrote.

Tinubu is reported to have fallen sick and undergone a surgery, but Mr Rahman said the former Lagos governor did not have any reason to have undergone surgery.

Before President Mohammudu Buhari returned to Nigeria recently, he also paid a visit to the former Governor of Lagos State.