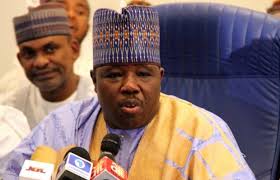 APC Chairmanship: Other aspirants are afraid to contest with me, says alimodu Sheriff

Ex-Governor of Borno State, Ali Modu Sheriff has stressed that the purported zoning of the chairmanship position of the All Progressives Congress to the North-central zone was fake.

He made this denial during an interview on Friday in Abuja, ahead of the party’s convention slated for February 26.

According to him, he was the target of the story because all other aspirants are afraid of contesting into the convention with him.

Sheriff stated: “I have to tell you an interesting story, I read it from Newspapers. The caption was that Ali Sheriff is edged out, why Ali Sheriff?. Supposed that was the situation, is it only Ali Sheriff that was looking for chairman in the northeast? There are so many.

He added that  since the leadership of the party has denied it, the purported zoning is fake.