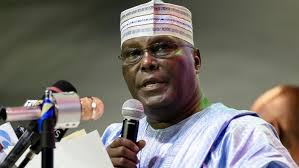 Atiku should apologize for messing up as VP- APC

The Presidential Campaign Council of the Peoples Democratic Party (PDP) was blasted on Wednesday over its latest push for the disqualification of the All Progressives Congress (APC) presidential candidate Asiwaju Bola Ahmed Tinubu.

Through its spokesman, Kola Ologbondiyan, the PDP PCC said it has taken its case to the court to have Tinubu declared ineligible to contest the February 25 presidential poll.

But in a swift remark, the spokesman of the APC Presidential Campaign Council (PCC), Mr. Festus Keyamu (SAN), said the opposition party was waking up rather too late.

According to Keyamu, the PDP was bereft of originality and ideas.

Keyamo said in statement made available to newsmen last night: “This is so laughable that Nigerians are beginning to see that these are remorseless people; leopards that cannot change their skin. Instead of Atiku to face the cameras, shed some tears and apologise to the nation for abusing his office as VP (vice president) with SPVs, his reply in summary is, ‘what-about-you-too?’ This is disastrously sad.”

He went on: Why did they wait all these months until we filed before they are now rushing to court? I challenged them more than two months ago, yet, they did nothing. It shows a team that is lacking in originality, lacking in ideas and lacking in vision.

“It is just an attempt to create a counter suit to our own. Unfortunately for them, Nigerians have seen through them already: SPV advocates that are trying to turn the tide of public opinions. Nigerians have decided; Nigerians have rejected them.”

Ologbodiyan told reporters in Abuja yesterday that the PDP PCC had proceeded to the court to demand among other things that Tinubu be declared “ineligible to contest the Presidential election by virtue of section 137 (1) (d) of the 1999 Constitution (as amended).

Ologbodiyan said the PDP “is filing for accelerated hearing in this case in the interest of the nation.”