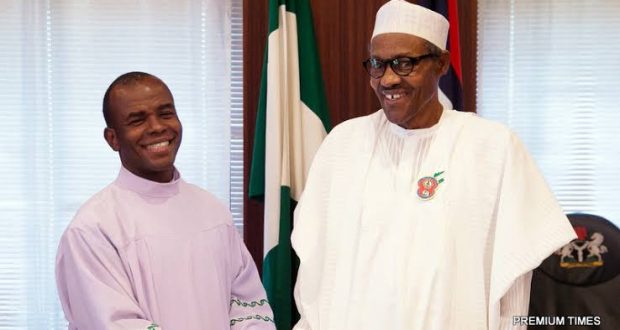 The Igbo group, the  Ohanaeze Ndigbo has reacted to  war of words between fiery Enugu priest, Rev. Fr. Ejike Mbaka and the President Muhammadu Buhari’s government.

Mbaka had called for the President’s impeachment over his handling of the security and economic challenges in the country.

But the presidency said yesterday that the priest was angry over President Buhari’s failure to give him a contract after he had made the request.

Reacting through a statement by its Secretary-General, Mazi Okechukwu Isiguzoro, Ohanaeze said Fr. Mbaka I”s a victim of use and dump.”

The Ohanaeze scribe, who blamed Mbaka for delving into politics in the first place, urged him to “go home and sin no more.”

He said, “What is happening recently between Fr. Mbaka and the presidency is quite a sad one. We see it as a relationship gone sour. We remember how they both enjoyed a robust relationship, with Fr. Mbaka campaigning vigorously for Buhari both during his first and second tenure.

“But now that the marriage has collapsed, the hell appears to have been let lose, with the presidency trying hard to mess Mbaka up. But we have one question for Garba Shehu: ‘is Fr. Mbaka the only priest that visits Aso Rock? What of Adeboye? What of Kumuyi and many others? This is a clear case of use and dump.”

He, however, said he believes Fr. Mbaka had learnt his lessons, adding “what he should do now is to deflate all these politicians who are running the country aground; after that he should cease from meddling into politics going forward. He should concentrate on his healing ministry and leave politics for politicians.

“Mbaka might have made some mistakes and over stepped his boundaries joining politicians, but definitely he exhibited courage to speak truth to power, he must have realized his mistakes. But why should Presidency cast aspersions on him for saying the truth?

“Mbaka has been forgiven for coming back to his senses. He should go any sin no more.

“Mbaka henceforth, should speak truth to power and stand by the suffering people of the southeast,” Isiguzoro further stated.

Previous: Rev Mbaka asked for contract from Buhari- Presidency
Next: Bishop Kukah: Buhari should have spoken with Biden, not Secretary of State