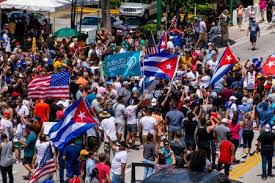 Cuba accuses US of sponsoring unrest as Biden lauds protesters

After US President Joe Biden said he “stands with the Cuban people”, President Miguel Diaz-Canel blamed the US sanctions for the protests in the country.

Biden had said the Cuban regime should hear its people and “serve their needs” as protests erupted against the government even as Cuban President Miguel Diaz-Canel said the US sanctions were responsible for the “policy of economic suffocation to provoke social unrest in the country, WION reports.

US National Security Advisor Jake Sullivan had warned Cuba earlier while condemning the authorities the “targeting of peaceful protesters”.

Obrador had called for the US economic sanctions to end as protesters came out on the streets on Sunday over the shortage of basic needs in the country. The Cuban President called for a “humanitarian gesture” as Cubans called President Miguel to step down.

People came out on the streets in Havana and several others places including Santiago as the country struggles amid the pandemic. It was the largest anti-government protest in decades as people chanted “Diaz-Canel step down”.

At least ten people were arrested by authorities.

Amid the volatile situation, Russia’s foreign ministry said it is “unacceptable” for there to be outside interference in the internal affairs of the country.

The country has been hit hard due to the pandemic with the vaccine drive going at a slow rate even as the country’s economy has contracted in the past year.

On Sunday, Cuba recorded 6,923 COVID-19 cases and 47 deaths with hospitals under pressure to treat patients.