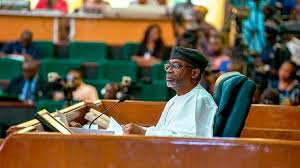 The Deputy Minority Leader, Toby Okechukwu has berated the Speaker of the House of Representatives for breaching the law on defection.

According to Okechukwu, Gbajabiamila ignored section 68 of the 1999 Constitution while reacting to the latest defection from the Peoples Democratic Party (PDP) to the All Progressives Congress (APC).

He cited ections 68 of the constitution, saying that the section provides that a member may lose his seat if he defects to another party with schism in his party.

68(1g) reads, “A member of the Senate or of the House of Representatives shall vacate his seat in the House of which he is a member if –

He lamented that  the PDP is worried by “continuous disregard for the constitution by the speaker on section 68(1g) of the Constitution.

Reacting, Gbajabiamila, rebuked Okechukwu he that the job of interpretation is for the judiciary, not him.

Gbajabiamila advised  the PDP to approach the court to seek redress if it finds any fault as regards the recent gale of defections.

Previous: Anambra Guber: I have financial muscle to compete with Soludo, Ozigbo- ZLP candidate
Next: House of Representatives receives report on Electoral Billl