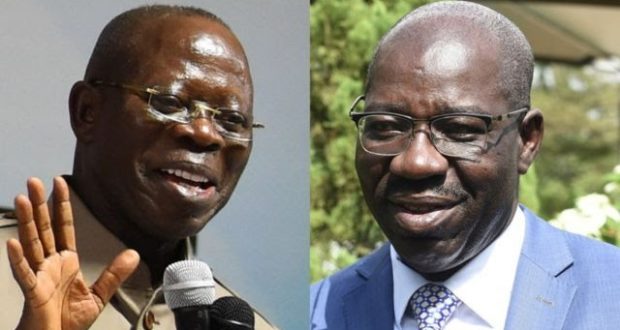 The All Progressives Congress in Edo and independent National Electoral Commission are at loggerheads over the September 19 governorship poll in the state.

Imuse accused Igini, a former Edo REC, of receiving a bribe from Governor Godwin Obaseki of the Peoples Democratic Party at his private residence in Benin to perfect the rigging plot.

He also asked Igini to explain his presence at Protea Hotel in Benin City where National Commissioners of the electoral body from Abuja were lodged, in fresh allegations raised by the party over Igini’s alleged connivance with Obaseki to rig the election.

Imuse said the APC had received testimony from some youth corps members, who detailed how they were approached by Igini and offered a deal to swap results with fake, pre-written ballots allegedly in production at the Edo State Government House.

He said, “Around 3:00am, Igini was seen driving into the private residence of Obaseki in Benin in company with two other known allies of Edo governor, one of whom was identified as Anselm Ojezua (former factional Chairman of APC in Edo State, who is an ally of Obaseki).

“At the meeting, Igini, Obaseki and other top PDP allies designed and examined ways and strategies to rig the outcome of the September 19 governorship election in Edo State with an exclusive focus on the production of fake ballots and the inducement of recruited INEC ad hoc staff to aid the success of the rigging plans.

“Already, before the meeting, we received information backed with proof on Igini’s illegal conscription of youth corps members who would be playing vital roles in the conduct of the election as ad hoc staff.”

But Igini denied the allegations, dismissing them as bare-faced lies and outright fabrications.

He noted that he and two other persons attended a friend’s mother’s burial at Issele-Uku in Delta last Friday.

He said, “For the second time within a week, my name has been needlessly and maliciously dragged into a political group’s statement on the Edo election. The statement falsely and erroneously claimed that I was in Benin on Thursday 27th August 2020.

“Contrary to that misleading claim, on the said date, I was in Lagos State; hence I find it very mischievous that those who made this cruel allegation now attribute the spiritual ability to be in two locations at the same time to my person.

“Secondly, let me state without any shadow of a doubt to those characters, who made this atrocious allegation that I had meetings with political actors where anti-democratic schemes were discussed, I have not met Governor Obaseki since he was sworn into office up until the moment of the press statement in contention.

“Given that I was not in Benin on the said day 27th August but in Lagos, the said meeting is unquestionably a mere figment of the imagination of those who made these allegations.”

Igini said that evidently those, who made up the concocted story do not know him.

He added, “If they do, certainly they will never attribute these anti-democratic sacrileges to my person.

“For the avoidance of doubt and to disabuse the minds of respected Edo citizens and voters, I urge everyone to disregard these lies and innuendos. I have never and will never be part of any scheme to rob voters of the right to choose their elected representatives.

“I have never been at the back but at the forefront of electoral reforms to ensure those citizens’ rights and access to ballots as the best means of the expression of the will of the people are strengthened and will never be part of any design to chase them.

“I urge the political groups to concentrate on purveying policies that will endear them to the electorate and stop relying on how to undermine and discredit the institutional pillars of democracy upon which the legitimacy of the election will repose.”