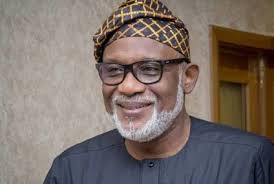 The Governor of Ondo State, has cried out, saying that those who lost election are making desperate efforts to blackmail his administratio.

Acccording to him,  the plotters also targeted senior government officials.

The Governor made this statement through  his Commissioner for Information and Orientation, Donald Ojogo

He noted that the motive of was to distract his administration.

Acccording to the Governor, the plan included cloning of official documents, outright fabrication of fictitious documents and concoction of false data.

According to the statement: “For the records, the Akeredolu-led administration stands on the tripod of integrity, transparency and accountability. These inspiring watchwords have provided the needed confidence and vigour for the government to thrive on the path of the modest efforts in the last four years plus.

“These virtues were indeed, the reasons sponsors of such plots could not find any incriminating transactions against the Government in the build-up to the last elections inspite of strenuous efforts in that regard.

“For Governor Akeredolu, he has moved on since the election and remains the pilot of the Ondo State Project for the benefit of all without discrimination. Elections, the intrigues as well as the activities of players remain confined to the past, he believes.

“Therefore, while Government remains unperturbed by the last kicks of disgruntled losers who voluntarily cleared paths of personal political destinies for themselves, it finds it expedient to raise the alarm as regards the intended act.”