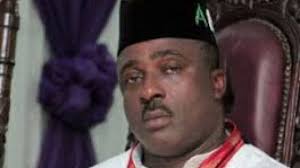 Eta dares Buhari’s led APC NEC, says it has no power to expels him

The emergency NEC meeting on Tuesday at a virtual meeting announced the expulsion of Eta following his refusal to comply with the decision of the 8th Emergency NEC meeting of June 25 that directed all party members to withdraw all legal actions against the party or any of its organs.

Eta had on November 26 approached an Abuja Federal High Court seeking an order of the court to nullify the dissolution of the Comrade Adams Oshiomhole led National Working Committee (NWC) by the NEC, to reinstate the Committee and be recognised as the acting National Chairman of the party, Vanguard reports.

But rising from its meeting which held at the Council Chambers of the Presidential Villa in Abuja on Tuesday, the NEC presided over by President Muhammadu Buhari announced the expulsion of Eta and took some other far-reaching decisions.

Reacting to the development in a telephone interview with The Nation,  Eta said the NEC meeting at the Villa had no power to expel him.

He said that the action of the highest decision-making body of the party was in nullity and argued that the Secretary of the Caretaker/Extra-Ordinary Convention Planning Committee (CECPC), Sen. James John Akpanudoedehe has no power to convene an NEC meeting.

He said, “I am already in Court. The lawyers amongst them should have told them that they can’t make that pronouncement since I am in Court.

“Their action is a nullity because it isn’t even the NEC of the party that met. Their so-called acting national secretary has no power to convene NEC.

On the dissolution of the party’s state executive, the Forum of State Chairmen of the party through its National Secretary, Dr. Ben Nwoye, who until the NEC meeting, the Enugu State Chairman said the decision of dissolving the party’s executive arm from the state to ward level, was a welcome development.

The forum noted that the decision was in the interest of the party.

When told that some members of the forum felt cheated and are not freely disposed to the dissolution, having endorsed the tenure extension for the Caretaker Committee, Nwoye said, “I don’t know where you got that information from, all I know is that this is the official position of the forum.”.

Previous: Just in: Taraba State lawmaker abducted by unknown gunmen
Next: Ortom will never return to APC, they almost killed him- Wike